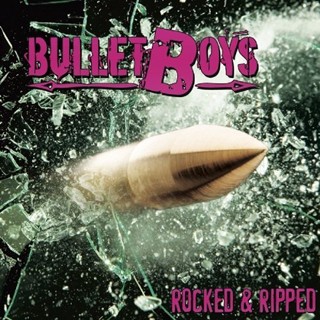 Review:
Either I have too much disposable income or my CD purchasing has become a serious addiction — how else could I explain spending my hard earned money on the BulletBoys latest ‘album’? My expectations for Rocked & Ripped were so low, and I’m talking the deepest depths of the ocean low, that I refused to listen to it with a full stomach — why ruin a good meal by barfing it all up because of another of these annoying cover albums?

It’s almost disappointing to report that Rocked & Ripped isn’t nearly as bad as I envisioned it would be. Of course it isn’t album of the year, or even album of the week, but vocalist Marq Torien himself makes this a sometimes entertaining collection as it isn’t exactly what I expected it to be. I don’t understand the song selection here though — usually these cover albums find the artist paying homage to their influences, but the renditions on this album are all over the map.

Who expected Torien and whoever is in his band this second to pull off Motley Crue‘s “Dr. Feelgood”? I certainly didn’t, but the BulletBoys sound reinvigorated covering one of their sleazy peers. The same goes for Bon Jovi‘s “Livin’ On A Prayer”, which musically is a carbon-copy of the original, but Torien‘s voice and occasional scream put the BulletBoys stamp on the classic. The biggest surprise however is the cover of Accept‘s “Balls To The Wall” which I thought would be a total abomination — and while the distorted ‘talking’ vocal delivery on the verses leaves a lot to be desired, Torien completely nails the chorus. Styx‘ “Renegade” is almost identical to the original, as is the Scorpions‘ “Falling In Love” (with George Lynch shredding away) — but a job well done on both.

Rocked & Ripped does sound like crap at times though as shown on Tom Petty‘s “Free Fallin'”, Giant‘s “I’ll See You In My Dreams”, and Mr. Mister‘s “Broken Wings” (man did that band suck!). Actually, the entire second half of Rocked & Ripped is way too mellow and pales in comparison to the rocking start. And let’s be honest here, has anyone been holding their breath in anticipation of the BulletBoys covering Amy Winehouse or Pink?. I doubt it, and if such a person does exist I suggest they seek treatment immediately.

Rocked & Ripped is a mixed bag for sure, but not as horrible as you might imagine — Marq Torien shines on the heavier rock songs on this CD and splatters his swagger all over (even in places he likely shouldn’t), so why can’t he lock himself in a room a deliver a BulletBoys album filled with sleazy hard rock delights?. Who knows, but I do wish someone would put an end to these ridiculous cover albums though, as a whole they are completely useless and do nothing but annoy fans of an already disrespected genre. I still think I wasted my money buying this album… but at least I didn’t throw up!