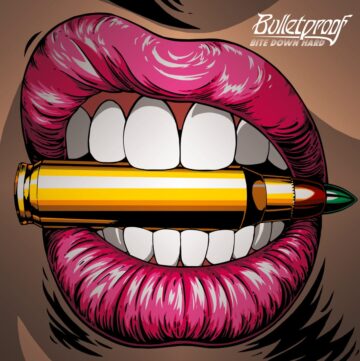 Review:
The first time that I heard Bulletproof‘s song “Drinking Too Much”, I knew right away that I would like the band. The guitar riffs were simple, the rhythm section was solid and the singing was rough and gruff. There was nothing complicated about the band. In fact, Bulletproof have not reinvented the wheel in any way with their debut album Bite Down Hard. If anything, the Serbian rockers borrow a hell of a lot from various bands all over the world including the simple musical delivery with rough vocals (but with poorer production) from Airbourne, the album cover from now defunct Canadian band Last Bullet and the album title from American rockers Britny Fox. Whether Bulletproof knew about Last Bullet‘s cover for their 2017 EP 80-69-64 or Britny Fox‘s underrated album Bite Down Hard, one thing is seemingly for certain — Airbourne have influenced the band’s musical’s delivery.

I almost equate Bulletproof‘s brand of music to comfort food. There is a certain relief that occurs when I listen to Bulletproof‘s songs. I know what I’m going to get. I know that I’m going to enjoy most if not all of the songs. I know that Bulletproof will not be experimenting in any way but simply delivering one straightforward rocker after another. Right from the opening track “Midnight Ride”, you cannot help but be sucked in by the simple but effective music delivery which is punctuated by frontman Nemanja Stojanovic‘s raspy voice. His vocals are kind of mish mash of what you might hear from Airbourne‘s Joel O’Keeffe and Cinderella‘s Tom Keifer. Whatever the case, “Midnight Ride” is a cool number with some tasty but once again simple guitar soloing throughout. “Drinking Too Much” starts off with a great guitar riff and delivers more of the same. These are the type of simple songs that I love to hear. “Blow My Fuse” has a very AC/DC feel to it with the slow guitar riff to start the song. It’s an easy song to headbang to. Once again, there’s nothing complicated here and that’s alright!

“Seven Years of Hell” brings the pace back up with Stojanovic really reminding of Keifer when he lets out some “Hmmm” throughout the track. I really like the guitar solo on this one. Nothing complicated but it really stands out compared to some of the other guitar solos on the album. If Bulletproof had come up with four more tracks of the same caliber as the first four on Bite Down Hard, I would seriously have to consider them for one of my top albums of the year. Unfortunately, there is a drop off with the remaining four tracks and most of it has to do with Stojanovic‘s singing. There is a fine line between delivering simple rock n’ roll but not sounding like you’re just playing in your garage, and the fifth track “Desire” feels like it’s just the guys jamming in a garage with Stojanovic sounding like he is stretching his voice a little too much. It’s a bit of a pity as the guitar solo really rocks and the verses are pretty good. “You Make Me Rock” finds Stojanovic having a hard time reaching some of those notes again. The chorus section is hard to get through and kind of ruins the song for me.

“Come And Love Me” has a slide guitar sound to it and really reminds me of Cinderella. That track would not be out of place on Cinderella‘s album Long Cold Winter. Sadly, the guitar solo on this song is quite underwhelming. It almost feels like Stojanovic is running out of steam towards the end of the record. The closing track “Another Shot of Love” starts off with a great guitar riff before Stojanovic shrieks away or I mean, sings away. By this time, I am wondering whether Stojanovic‘s voice is now shot because his raspy delivery that was so cool during the first half of the album is now painful to listen to. It’s almost like he’s killing a cat or something on this last track.

I guess that there is a fine line between brilliant and awful when you’re putting out simple songs with such raspy vocals. At times, Bulletproof reach the brilliant mark but they also reach some lows when Stojanovic stretches his vocal chords too far. Although I have been critical of the last four tracks on Bite Down Hard, the reality is that I can put this album on from start to finish, and easily enjoy every track while putting up with some slightly off key vocals at times. Bulletproof don’t offer anything groundbreaking, new or earth shattering on Bite Down Hard but at the same time, they do offer some comfort food to my ears.

Bulletproof‘s “Drinking Too Much” video: