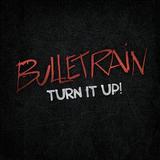 Review:
The new Bulletrain EP Turn It Up! sent me back to the 80’s in the best of ways. These Swedish rockers are not trying to reinvent heavy metal, they are playing it forward. Pounding drums, solid hooks, impressive guitar solos, and all the things we loved about the 80’s right down to the ‘gang style’ chorus.

“My Way” is party hard rock, and in total 80’s style this song is made for the audience. The guitar solo is excessive and fun which is what this style of music is all about. It has a serious Keel kind of flavor to it. When looking up the band on myspace you can see that their heroes were Motley Crue, and Tommy Lee would be smiling listening to the drumming on the rocking power ballad “Fly Away” (which contains a touch of Def Leppard). The second song “Turn It Up” is quintessential 80’s European hard rock while the fourth and final track “Even With My Eyes Closed” is an even better example of the group’s hard rock ballad ability. The lyrics get short changed a little with English being their second language, but we listened to David Lee Roth‘s lyrics to “Panama” and rocked to that song… and I’m a big fan of Dirty Looks and L.A. Guns and both of those bands had lyrics that at times that made me scratch my head.

This is about the music, and these guys have the potential to grow into a great band. They need to work on their production values while touching up the lyrics, but listening to the guitars and drums I felt like a kid again. “Even With My Eyes Closed” is going to make my iPod play list.

Bulletrain has life to it. I hear the potential that they have… the two young guys they have on the guitar play hard, fast, and with passion. It’s also hard to believe that the drummer is so young as the ages in this band run from late teens to early 20’s, so the sky is their limit. I like the song “Bad Blood” as well, which is a song currently available only on their myspace page. It shows that these guys are diverse and have great potential. If you’re in Europe and these guys are on the bill you’re going to get a good show.

Reviewed by BC Beneke for Sleaze Roxx, October 2009.