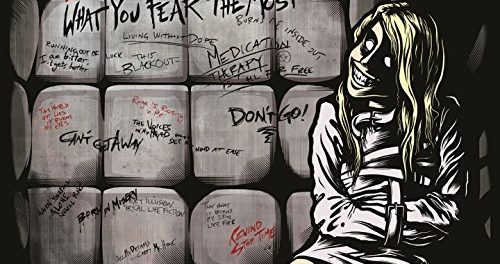 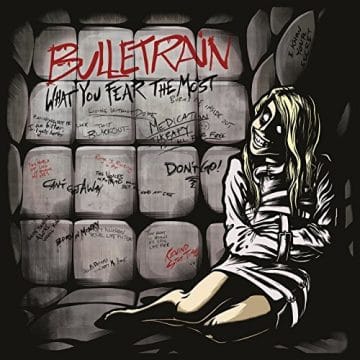 BULLETRAIN
WHAT YOU FEAR THE MOST
Released on September 23, 2016 (Aor Heaven)

Review:
WET, TIRED AND LONELY! Whoops, too loud? This is an album to sing along to and tear apart your vocal cords with it! Don’t like it? Fight with me!

It was 2015 when I saw Swedish hard rockers Bulletrain for the very first time, opening for Warrior Soul in Tilburg, Netherlands. I was mesmerized. What a great performance! Unfortunately, the whole venue was already partied out from the night before (including myself), so the response to Bulletrain was kinda low. However, I went searching for the previous released EPs and their debut full-length Start Talking. Guys, I believe I just found myself a household name for today’s sleaze scene because Bulletrain kicks you right in the teeth!

Their sophomore full-length album What You Fear The Most was released on September 23rd, so I better get my ass behind my laptop and start talking… writing!

Bulletrain kick off What You Fear The Most with “Memory Lane” which is a great opener combining simplistic, chopping guitar riffs with catchy Poison like lyrics. It’s Skid Row-ish badassery and hard as nails. At some point, it’s almost like I’m listening to power metal, which is a welcome, modern twist if you ask me. In short, an awesome way (including the cowbell) to start things off!

Next up is “Love Lies” which is everything but a power ballad, though the lyrical content speaks for itself. I’ve read in an interview with drummer Jonas Tillheden that the song is about his ex-girlfriend with whom he had an intense history. Well, this track is very intense as well! Piercing riffs and crushing, fire-fueled drums make my head go crazy. I have to take note of the superb voxx from Sebastian Sundberg; right before the guitar solo kicks in… damn!

“Can’t Get Away” feels kind of whiny, but it works perfectly in contrast to the previous tracks. It’s heavy, almost back-breaking and feels like a drag. A nice and welcome addition is the piano, but the chorus is pretty forgettable. A good, average, well-crafted song. Who wants ten killer hits on one CD anyway?

Next in line is “Fight With Me” which is the tough guy song! The intro reminds me of “American Psycho” — you know, The Misfits‘ anthem? And there it is — finally — the recognizable Bulletrain sound, which can be heard on “Out Of Control” (my favorite Bulletrain track) and “Dicing With Death.” A song in the vein of previous mentioned bullets — a heavy hitter, a no-brainer and perfect to get the stage dives going!

Wow what’s this? The National anthem? “We Salute You” is something completely different. After a few more spins, this track keeps poppin’ into my mind and makes me raise my fist. A ballad with a twist. Soft spoken lyrics with hidden power. It’s perfect to end live shows with!

Track #8 is “Old Lighthouse” and has a pretty interesting intro, but why? Again, we hear different vocal ranges by Sundberg. This man beast has such a killer voice. The subject isn’t clear and I don’t feel this one. It doesn’t suit the Bulletrain image in my opinion. Craaaazy screams though! Mr. Halford — you have a true competitor over here!

“Fear” is the first single and Bulletrain deliver a good solid song. Not one of my favorites though, but a well-chosen track to reach a broader audience. This crazy train ride comes to a halt with “Far Away” — a sensitive one with some up-tempo parts. I rather would go out with a bang guys! Nonetheless, it shows the great capability of Bulletrain as musicians.

Hey, I guess you already purchased What You Fear The Most after reading the first part of this review. If not, this album is a must have for every hard rock/’80s/sleaze fanatic. The diversity of the songs, great lyrics and the perfect mix between old school and modern rock makes What You Fear The Most THE total package of 2016. Not seeing these guys live… that’s what fears ME the most!