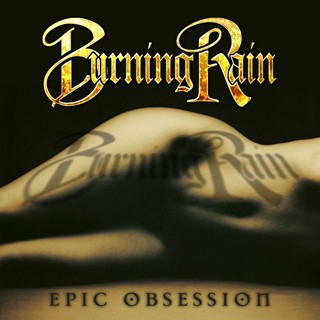 Review:
If ever there was good reason not to invest time in an album, it’s when it carries the rather dubious ‘supergroup’ tag — or when both band and album sound like bottles of perfume. Burning Rain‘s line-up for the delayed reunion album Epic Obsession comprises members with a number of associations, most notably original founding member Doug Aldrich, whose Les Paul and six pack have been seen working out for Ronnie James Dio and more recently David Coverdale‘s Whitesnake, where it seems the guitarist has survived longer than most — and possibly is the reason why this album’s been such a long time coming.

I’m starting here by tipping my hat to the production — this record sounds rich, vibrant, warm and edgy, evoking a more traditional feel. “Sweet Little Baby Thing” and the sleazier “The Cure” (the latter carrying a brooding crunchy riff) lead the way to “Till you Die” which is just about saved from its lyrics as Aldrich conjures an exhilarating Steve Vai-esque workout. Burning Rain co-founder and vocalist Keith St. John is on fine form and delivers the obligatory chest-beating acrobatics with ease, but it’s really when the band drop the posturing and stretch out that they really connect.

“Heaven Gets Me By” is altogether more satisfying (particularly the acoustic version included as a bonus track) whilst the drama of “Our Time Is Gonna Come” lights up Epic Obsession as the arrangement twists, turns and burns. The rueful “Too Hard To Break” and “Made For Your Heart” are melodic joys, although “When Can I Believe In Love” is sadly a spoonful of sugar too far. A rather pedestrian cover of Led Zeppelin‘s “Kashmir” adds little to the album and does nothing to dampen the obvious comparisons.

Burning Rain have cranked out a ‘supergroup’ album which is better than most, but inevitably their long-awaited third album leaves the listener wishing for something altogether more fragrant.