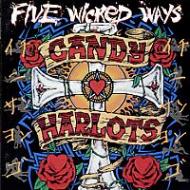 Review:
Even in the early 90’s it was a rarity to find an Australian sleaze metal band, but the Candy Harlots were one. The group had reached Top Forty success in their homeland with the Foreplay EP, but Five Wicked Ways was their attempt to make as much noise in the rest of the world.

Rocking songs like “Danger”, “Cheat On Me”, “The Lady Shakes” and “The Wildest Way” played homage to musical influences such as AC/DC and Rose Tattoo. There are two good slower paced songs in “Where No One Dares” and “What Are We Fightin’ For”, and a nice acoustic number called “Devil’s Blues”. The band looked and sounded killer, but constant line-up changes led to an early demise and a bad case of unfulfilled potential. I give Five Wicked Ways two thumbs up!