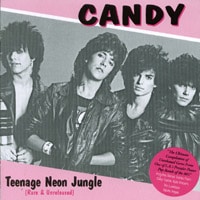 Review:
This release shows the beginnings of a pop band that ruled Los Angeles in the early 1980’s. They released one album (pure pop sing along classic, in my book) Whatever Happened To Fun on Mercury Records and toured with Corey Hart and Rick Springfield before lead vocalist Kyle Vincent (the best pop vocalist) left for a solo career that continues to this day. This band had the best looks (shorter black hair, skinny and fashionable) and the best hooks.

Some of the songs from this CD made it onto their debut, including “Whatever Happened to Fun”, “Turn It Up Loud”, “Kids In The City”, “Weekend Boy” and “The Last Radio Show”. All of which are basically the same, maybe a bit dirtier, but still as pop as ever. Other songs are earlier demos such as “Champagne”, “Daddy Is A Jet” and “Number One”, which show a Bay City Rollers style, which is a cool thing.

The rest of this CD is made up of live stuff such as “Kids In The City”, “She Loves You” and “Last Radio Show”, and songs from member’s post-Candy projects, both solo and band. The standout of the post stuff is Electric Angels‘ “War Is Over”, featuring another great pop/rock vocalist-Shane!!

This is a great must have collectors item for any fan of this band, as this is only the second release! It shows that they had hooks, vocals and songwriting down, way before they had record deals. Jonathan Daniels writes the catchiest hooks and the wittiest lyrics and Kyle Vincent remains one of my favorite vocalists to this day (his solo stuff is great and also available on SongTree Records). Gilby went on to play with Guns ‘N Roses and Heart and all members are still rocking in one form or another and recently got together for a one off show at the Cat Club in Hollywood, Ca. Great songs, great looks, great vocals and great hooks – buy it now.