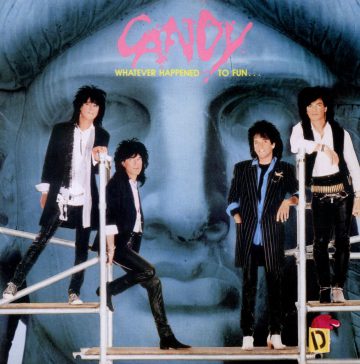 In a real ’80s world, combining the vocal pop innocence of Kyle Vincent and the infectious yet youthful real life themes of bassist Jonathan Daniel‘s songwriting under the power pop umbrella of former Raspberries producer Jimmy Lenner and ex-Raspberries guitarist Wally Bryson (in the role of musical director) would easily equate into massive radio success. But even adding in the spot on drumming of John Schubert and perfectly placed pop rock guitar of future Guns N’ Roses member Gilby Clarke to create a tight youthful package that not only sounded great but also looked great couldn’t do the trick. On record, ’80s L.A. band Candy arrived packed with the sounds to rock Top 40 radio and a look that should have made them the perfect visual to bridge the gap between Def Leppard and Duran Duran on any ’80s teenage girl’s bedroom wall.

Despite seemingly having all of that going for them, Candy and their 1985 record Whatever Happened To Fun left only a mark on those few who to this day hold the nine terrific tracks contained on vinyl to heart. It’s a tale that could in a way be perfect for MTV‘s Behind The Music had they they achieved enough of a rise to even merit a fall made even more tragic by the fact that from start to finish, Whatever Happened to Fun has as many great songs than some of the ’80s biggest albums featuring a hit single or three. Just the fact that this commentary on the awkward jump from the fun, fantasy, and freedoms of youth into the real world struggles of adulthood under the guise of a great, infectious pop record didn’t make Whatever Happened To Fun one of the classic soundtracks of ’80s youth life still for many boggles the mind. Power pop with a taste of subtlety perhaps but still, for a small few who were lucky enough to discover the album at a time well before you could just click a button and have the entire musical universe at your finger tips, Whatever Happened To Fun will always be an important reminder of a special time.

Part sign of things to come, part sign of the times, Candy‘s one and only official release in August 1985 landed with a single video for the title track, a look at the vanishing of youthful innocence wrapped up in enough uptempo sing-a-long catchiness to make growing up almost seem fun. Much like Bruce Springteen‘s eighties anthem “Born In The USA”, if you take your attention away long enough you almost forget that there’s actually darker undertones in the subject matter. The crash of realism on a platter of bubblegum goodness is a far cry from the usual nonsensical norm of ’80s pop and glam rock. As mere background music, Whatever Happened To Fun simply comes off as an energetic notch above teeny bopper pop but with concentrated ears, it becomes a historical time stamp of a segment of teen life in the mid-’80s. Yet as much as it works to warn of adult days to come, listening back now it sounds nostalgically magical and while the performances are to be applauded, it’s the songs themselves that deserve the majority of the credit.

For those of us with memories of dreamy weekend rock and roll escapes from a near week’s worth of teachers, rules, and various family issues, tracks like “American Kix,” “Kids In The City,” “Weekend Boy,” and “Electric Nights” offer reminders of adolescent struggles and those much needed temporary moments of teenage weekend liberation. “Turn It Up Loud” takes the sneaky teenage action up a notch with a fun take on the classic “parent’s aren’t home” angle complete with innuendo-driven play on words that is as much turn it on as it is turn it up. “Lonely Hearts” explores the isolated flip side of anxiety-laced silence and loneliness. For most who lived their teenage moments through the ’80s ferociously out in the mix of things, the heart pounding roller coaster excitement of being on the edge of heart quake and heartache became an unforgettable experience that regardless of the amount of first kisses and first heartbreaks will always hold a special place in a rock and roll heart. In 1985 on Whatever Happened To Fun, Candy somehow managed to capture the experience perfectly while amazingly not making a commercial splash for their incredible effort.

Finishing high school the year Whatever Happened To Fun was released, I fully bought into the songs as themes for the next chapter in life especially “The Last Radio Show.” While my parents more than likely took the simple stance of, “Enjoy this last moment, tomorrow you’re an adult,” the overwhelming feeling of reality was far great standing on the edge of change thinking back to the moments along the way. In his lyrics, Daniel perfectly captures that while Vincent‘s youthful vocals paints an emotional picture of grabbing hold of a last moment in an innocent world filled with the joy and pain experienced along the way. Hearing the song now, it is astonishing how this group made up of these four guys still themselves young, were able to capture such a deep sentiment not only relevant to kids of any time period but adults as well as “The Radio Show” metaphorically could signal the last day of any part of life. Vincent gently drives the point home with the final words “The world’s closin’ down, the world’s closin’ down in memory of the melodies we love, just tune in the last radio show” before an emotionally nostalgic finish of doo wop vocals and saxophone leads to an almost Eddie and The Cruisers type of fade. Even now when I hear this song, I feel like one of the few misses on Whatever Happened To Fun is this song not closing out the record. It is powerful on its own but had it brought the whole thing together at the end, even more so.

Come the ’90s, the usual growing pains of youth would take a turn that going forward would be painted much darker musically at times making teen life sound more like a miserable purgatory with adulthood as the only escape rather than what many refer to as “the best years of our lives” leading up to the tough realities of growing up. While the tunes on Whatever Happened To Fun do their best to capture those mixed up feelings of being a teen including the highs and lows of everything from moving on to the many sides of love, it does so in a way that while not taking the impact of moments lightly, also reminds us that the end of adolescence isn’t the end of the world. Yeah, back then, it might have felt like it and sure, I think many of us would kill for a time machine back but over the years, what hasn’t killed us has just made us appreciate those times even more.

Even if your last day of high school was in 1985, 1975 or 1995, the songs on Whatever Happened To Fun have that same meaning and fun comfort. Not to mention a great reminder of why the music was, and is so important to us now years later. So yeah, whatever did happen to fun? Nothing. It just grew up and we continue to sing, dance, laugh, and cry along and most importantly, until our last true radio show, turn it up loud.

Candy‘s “Whatever Happened To Fun” video: