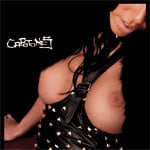 Review:
This is a great debut album by this crazy psychobilly group. I know you are asking what the hell they doing on this website, but if you hear them you’ll find some over-the-top rock and roll with glam, punk, psychobilly and sleazy attitudes. If you see them playing live you’ll know it for sure.

They are influenced by artists such as The Misfits, Marc Bolan, Dick Dale, Reverend Horton Heat, Beach Boys, Cramps, New York Dolls, Elvis and everything that worships booze, fast cars, sex and parties. Most of the lyrics are in Portuguese with a few lines in English and even one song in Spanish. On stage they look like hell-raisers with leather pants, horror makeup and a psychic attitude.

They start the disc with the song “Tres” (the first video off the album), a song with inspired guitar work, great hooks and fun lyrics about a threesome. Then they pay tribute to their favorite drink on “Jackie D”. Even if you don’t understand what the hell they are talking about you’ll keep singing along “Jackie D Jackie D Jackie D” with the backing vocals while Pablo sings stuff which means “You ripped my clothes and burned my guitar, but I’ll kill you if you touch my bottle” or “Jackie will never leave me so I’ll move to the bar”. “Teoria do Caos” warns you that too much fun may kill but they don’t care while “Verao Quimico” has a little Stray Cats influence about a summertime junkie with the chorus in English. “Hijo de la Muerte” sounds like the Cramps loaded on cocaine singing in Spanish and “Blues Traveco” tells a story about a guy who found something extra and unexpected on a wild night – one of the best songs here with a strip club groove and great slide guitars.
Another stand-out track is “Handsome Devil”, with all-English lyrics and rocky guitar hooks.

The multimedia stuff is very well done with the video of “Tres”, a performance of “Jackie D” live, wallpapers and tons of pictures of the band. If you keep watching, you’ll be listening to some non-credited songs playing in the background, like “Dead Girl” and some instrumental tracks.

Right after they released this album their drummer Rodrigo Pinto moved to New York (he’s now playing with Seth Kess and his Black Market Band – check them out). And just a warning about the CD cover; sometimes things are not exactly like they look.

The Capotones official website (which is under construction) is located at www.capotones.com and sound samples can be found at www.protons.com.br.