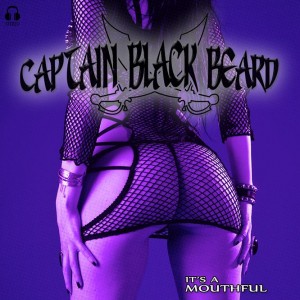 Review:
It’s a Mouthful is Captain Black Beard’s third album, so they clearly have a following in and around the clubs of Stockholm. The Swedish band has had some success as well touring the European festival circuit and venues from Scandinavia to the UK.

I don’t like to give bands negative reviews for many reasons, but mostly because they work their asses off to be the best they can be. And good for them. Bands don’t need some reviewer to undermine them. With that caveat out of the way, I am free to say that I’m less than impressed with Captain Black Beard. The music is bland and superficial, and on the poppy side of hard rock.

Captain Black Beard claim they are for fans of Aerosmith, Deep Purple, Guns N’ Roses, Led Zeppelin, The Beatles, and Alice Cooper. I hear none of those bands in any song on It’s a Mouthful. Alright and to be fair, there’s maybe a little Deep Purple on “Far Gone.” I don’t even know if I could make another accurate comparison, other than Danger Danger, or maybe Steelheart. But that’s doing a disservice to those two bands.

“All I Need” is a syrupy serving, offered up with a sugary piano beginning that evolves into a sticky-sweet chorus and doesn’t encourage me to sing along. “When It’s Love” is much the same, without the piano, and with a flat verse and uninspiring guitar line. “Coast To Coast” has what sounds like a lap-steel, and a serious old-school country music sound. This song does not belong. One of these things is not like the other. The self-described Dave Grohl tribute song “Falling” sounds nothing like what Grohl would perform, and from what I could tell the lyrics aren’t relevant either. The only thing I can think of is that “Falling” is in reference to Grohl’s June 2015 fall of the stage in Gothenburg, Sweden that broke his leg. Or, it could be that’s just my own twisted ironic humour kicking in. You’ll note that I have no liner notes from the album so there might be a back story I’m missing…

On the other side of the spectrum, “Mouth Full of Love” isn’t bad with its heavy opening guitar line and pulsing bass. It is good and hard with a little bit of Faster Pussycat. And although “South Beach” sounds like Bryan Adams in the opening, it’s an “ok” rock song. “Tearing Me Apart” is kinda cool, but nothing that would make me a fan for life. The lead-off single “Divided Feelings” isn’t bad, but not really my style of pop metal.

Captain Black Beard may have nearly 4,000 likes on Facebook and almost as many YouTube views, but they need to do something more interesting to win me over. It’s a Mouthful doesn’t cut it for me.