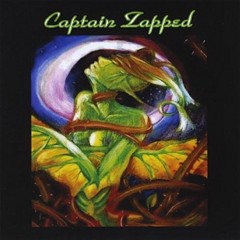 Review:
Alex Mitchell has recorded some weird music since Circus Of Power went on hiatus, but Captain Zapped trumps them all. With his Fat Nancy cohort Billy Tsounis the duo have created an odd psychedelic acid-trip that takes several twists and turns. Forget the music for a minute, check out Mitchell wearing a cape and skull adorned loincloth on the back cover of this self-titled debut. I don’t know what sort of drugs were taken during the recording of this CD, but it must have been some killer stuff.

Don’t expect the New York sleaze of Circus Of Power on Captain Zapped, instead envision an eclectic combination of The Doors, Monster Magnet and a funkless Red Hot Chili Peppers. Not everything impresses, which is to be expected with a release such as this, but I find the album’s diverse approach to be infectious over repeated listens. For me the three tracks that really stand out are “Sugarbox”, “Touch The Sky” and the fuzzy “Sweet Topanga Blues” — not entirely accessible, these three really seem to capture Captain Zapped at their bizarre best. Other times the band completely loses me, especially on the dreamy/trippy “Lost In Space” and the spoken-word “She Is My Everything”. To make matters even more confusing, “Hot Rod Girl” takes on a T Rex glam rock slant not unlike that of “Bang A Gong”.

One thing I wish was included on this bare-bones independent album was a lyric sheet, because there are some real gems on here. “Our bodies become entangled like hungry snakes, then melt together like the rising sun”, “Got your legs in the air and I’m tugging on your underwear, cause you’re the hottest piece of ass in the whole damn country fair” and the very appropriate “Met some natives up in North Dakota, spent the night all stoned up in a tent” are just a sample of the usual lyrics contained within.

Captain Zapped is the musical equivalent of a circus sideshow — not every exhibit stands out, but you can’t help but putting your money down to see the freaks. I’d be afraid of listening to this CD while tripping on acid because who knows what hallucinations would appear from your stereo speakers… I wonder what Alex Mitchell and Billy Tsounis saw?