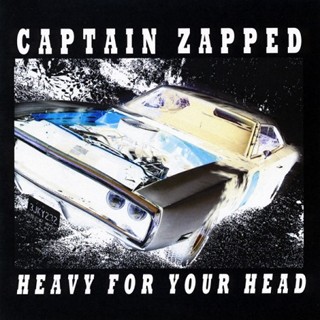 Review:
If anyone needs proof that the war on drugs in a complete failure look no further than Captain Zapped, the brainchild of Circus Of Power frontman Alex Mitchell and his Fat Nancy partner Billy Tsounis, who have returned for a second dose of acid inspired psychedelic lunacy. I get the feeling Columbian drug lords were sending fleets of LSD filled submarines directly to the band’s studio during the recording sessions — how else could one explain this CD?

Gone are the cape and loincloth (I’m still not joking!), replaced instead by face-paint that takes me back to my youth of watching the Voodoo inspired wrestler Papa Shango, but just like on their self-titled debut, Captain Zapped throw conventional ideas out the window on Heavy For Your Head.

Album opener “Shake That Pussy” has a similar dirty feel to singer Alex Mitchell‘s previous band Circus Of Power as it thumps along in a sleazy manner while “Another Pretty Suicide” could easily be a Circus Of Power outtake. From there things get weird… and I mean REALLY weird. “Spaceship” lives up to its name, and if aliens were to abduct the members of Captain Zapped who knows what they would discover. “Rad Little Bitch” is complete madness, or as the lyrics state, “crazy as a shithouse rat” — the band completely lost me on this one. The silly and haunting ballad “In The Rain” asks, “Can you tell I’ve gone insane?” I don’t think I have to answer that question!

Heavy For Your Head heats up again on “Time Machine”, and later on “Motor City Breakdown”, which finds Mitchell growling and sneering like days of yore — and it results in two of the best tracks on the album. In “Rock And Roll Angels” the members of Captain Zapped suffer from their first public flashback, reusing a few lyrics from their debut album before all hell breaks loose on the strange Doors inspired title track. Rounding out this musical equivalent of a circus sideshow is the rocking “True Love Rocks Hard”, a pretty good distorted number that wraps up the CD nicely.

You could use many adjectives to describe Heavy For Your Head, including words such as strange, odd, weird, bizarre, absurd and countless others. But I think one phrase captures Captain Zapped‘s latest effort best — completely fucked! You’ll definitely need an open mind to enjoy Captain Zapped… or even better, a mind that has been enlightened (or scrambled) by hallucinogens.