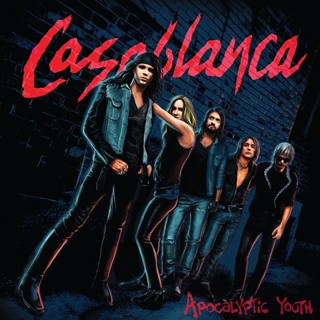 Review:
It would be very easy to imagine Casablanca sweeping down the Sunset Strip on a fleet of Harleys, swigging from bottles of JD, dreaming of ‘Girls Girls Girls’ and generally having ‘Nothin’ but a Good Time’ — but first impressions can be misleading. Casablanca actually hail from Sweden and are among a number of outfits spearheading a scene that many believed Kurt Cobain and the boys had buried forever. Guitarist Ryan Roxie boasts an impressive resume — including Alice Cooper, Slash, Electric Angels and Gilby Clarke — and his trademark leads dominates this slab of melodic rock where an airy rhythm section allows the songs to breathe and where the chorus is certainly king.

So what about the songs? The anthemic title track kicks us off but feels a little self-conscious lyrically. Themes of a world built on lies, displacement and false promises abound: “There’s nothing out there/no voice in the sky” — weighty stuff indeed for Casablanca who instantly feel more comfortable with the album’s second (and stand out track) “Deliberately Wasted”. Social commentary is quickly exchanged for good old fashioned rebellion reminiscent of early Skid Row. Frustratingly though, the mid-paced current single “Downtown” follows and fails to maintain the tempo, and the album doesn’t really recover until “Rich Girl” and “Secret Agents Of Lust” kick in a little later. In the meantime we have “The Juggler” which has an almost ’70s disco rock feel once visited by the likes of KISS on Dynasty. It could be a great song but it essentially feels dated, out of place and a little ill advised. “Beast Of Summer” chimes with the feel-good vibe of “Downtown”, but the band are really at their best when sounding slightly grittier and less consciously formulaic because they sound more authentic for it.

There’s plenty more in the tank here, as Apocalyptic Youth is a strong, although flawed, debut. Surely the stage is where we should hear these songs again — many of them would come into their own when less affected by the album’s slightly clinical, at times, contrived feel. Ljung sports the bandana, but there are some elements of the ’80s that should be left behind and the production is certainly one of them… arenas await!