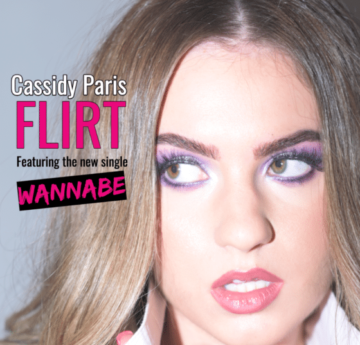 Review:
Eighteen year old Australian self-confessed “Rock Chick” Cassidy Paris  releases her seventh single in EP format, to continue the prolific form that she has shown during the last couple of years, and since the release of her single “Stand” way back in 2018.

“Wannabe” is co–written by Paul Laine of Danger Danger fame and bursts excitedly out of the speakers in infectious style. There is a distinct range of influences on this song, not least and fairly obviously Avril Lavigne, which is not a bad thing commercially, as both Avril and now Cassidy certainly  know their way around a memorable hook and radio friendly sound, and “Wannabe” is most definitely firmly settled in both of those camps.

“Like I Never Loved You” continues in similar vein with a huge chorus, a Lzzy Hale inspired vocal, and more Lavigne stylings in both production and style, and again, none the worse for it. Previous single “Give Me Your L O V E” is a fully blown anthem with seductive vocals and a pink style production that really should have been a worldwide smash, given the current dearth of new pop-rock talent permeating the national charts anywhere these days.

“Song For The Broken-hearted” and “Talk About It” are live recordings which would normally annoy me as I feel they are generally lazy additions to recordings, but both of these songs are so well done – particularly “Talk About It.” The live tracks show a growing maturity and an obvious ability to reproduce the songs in a live setting, that make them a forgivable and enjoyable addition in this instance.

Backed for the most part by members of Wicked Smile who play their part in this perfectly, especially the fine guitar work of Steve Janevski on “Wannabe”, this energetic, radio ready release is perfect if you are in the mood for some stylish pop-rock to start your day off with a big smile. Cassidy is already attracting acclaim and, on the basis of this release, rightly so. I for one look forward to what she does next.

Cassidy Paris‘ “Give Me Your L O V E” video: