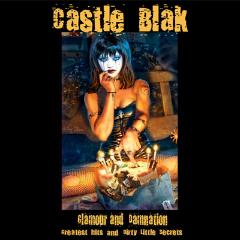 Review:
A Castle Blak compilation/box set has been rumored for what seems like eternity, and no wonder it took so long – talk about an ambitious collection! Three discs, 45 songs, and one interview spanning over three hours comprise Glamour And Damnation – as well as extensive booklets, lyrics, rare photos and song-by-song memories all sealed within a little black box that was signed and numbered. This is how every retrospective should be designed!

Musically this set covers a lot of ground, but I would say that the predominant sound represented here is 80s power-pop glam. If you remember Castle Blak (or the offshoots Monster Island, CandyAppleBlack, etc.) from back in the day, or are curious and want to check them out for the first time – then this is the release for you.

It is hard to cover everything on a box set in a short review, so I’m just going to throw out some of my favorite tracks. The standouts for me personally are the chugging “Ten High” (which sounds huge with the fake crowd noise), “Good As It Gets”, the Bon Jovi-esque “Sleep With The Angels”, “No Bed Of Roses”, the dark and haunting “I Know You’re A Bitch”, “Rusty Razor Kiss” (and its cool Electric Angels vibe), “She Really Gots Me Where She Wants Me” and for some well fermented 80s cheese check out “Glory Hole”. KISS Army members might want to look into this album for the three covers that show up – and speaking of covers I liked the obscure “Throw The Book” and the rocking version of Neil Sedaka‘s “Calendar Girl”.

Glamour And Damnation covers it all – the romance, the heartbreak, the mystery, the fun times and even a murder/suicide. The best part is reading Regent St. Claire‘s memories about how and why each song came together, there are some interesting explanations to be found. Castle Blak will more then likely go down in history as one of those bands that never quite made it, but on this three volume set the band does their damnedest to show what an injustice that is.