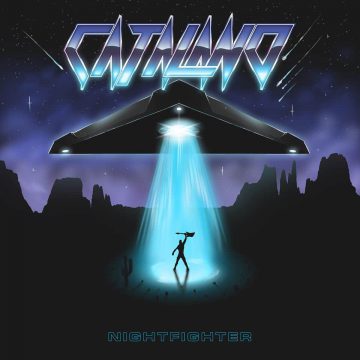 Review:
I was never a fan of De La Cruz. I was never a fan of Catalano. I am talking, they did zero for me. Not even on my radar. I dismissed everything I heard from them. We can all admit that this past year has been a weird one to say the least. Personally, I had a lot going on and I will admit, no excuses, but I submitted so few reviews for Sleaze Roxx that I did not even get to participate in the end of year awards. Shame on me, because if I had been able to participate in them, my choice for album of the year would have unanimously been the sophomore release from Catalano, Nightfighter. I have periodically checked to see if someone else would post a review. Each time, to no avail. Not only that, but nobody included this record in their end of year accolades. Flabbergasted would be the only word that describes this! For a website that’s literally called Sleaze Roxx, no other release in 2020 was as sleazy or as rockin’ and what Roxxi Catalano and company produced. The time to ignore this masterpiece has come to an end.

Like I have said, this band was nowhere close to being on my radar, but surprised me in 2018 with the single, “Wildfire.” While the production was not the best and the track sounded too digitized, there was enough there to catch my attention. Fast forward to December of the next year and my attention was fully peaked with the dropping of the single and video for “Wildest Dreams.” Who was this band and where had they been all my life? Wow, what a killer song! Excitement was running high as anticipation for the full-length album built. On February 29th, the album, Nightfighter, was released on digital platforms. After a brief skim through the song samples on iTunes, I hit download and never looked back. Not since the debut by The Cruel Intentions have I played an album so consistently and non-stop. The only negative to me was that there was no physical release, but that would come.

Lead vocalist and band leader, Roxxi Catalano, has just enough grit and screech in his vocal style that he reminds me of a younger Axl Rose. Oftentimes, that comparison is a death sentence to me but not in this case. There certainly is no Axl rip off here, merely a subtle similarity in squeals. His voice is unique enough when he exercises some restraint that I really cannot think of another vocalist to compare him to. The Axl grit rears its head right out of the gate as the opening song “Livin’ It Up” kicks things off in rocking fashion. The guitar duo of Matt Fawcett and Rory Joy rip through this set of songs with great riffs and well-placed licks. The fact that Roxxi throws in his little “Say something!” before a solo or “Kicks!” before the bass drum pounds are the kind of little things that I just eat up in a rock and roll song.

This album also features some cool gang vocals but one line from the second track that kind of epitomizes a specific element of this band says “I ain’t said nothing, so why act like you’re afraid of something.” This band has an edge to it. They look like a really cool badass rock band, but they also have a bit of a vibe like they could also kick your ass. Watch one of their videos and see for yourself. Before you can blink the first three tracks of the album are over and we are into the aforementioned lead single, “Wildest Dreams.” This might be the apex of this album as it builds steadily though these first four tracks. “Overdrive” keeps the party going. If I absolutely had to pick a song to be dubbed the worst of the album, I suppose “Saturday Night” would be it, but you would have to hold a gun to my head in order to get me to do so.

The sleaze factor as well as their rougher edge are on full display with the kickin’ “Whatever I Want.” Every good hard rock album needs to slow things down a notch with a ballad and Catalano outdo themselves with the beautiful “Lost In Love.” Give it one spin and you will be singing along to the chorus. The second single from the album, “Rock The World”, closes things out with a bang. To quote the song to those of you who have yet to hear this gem, “What the hell are you waiting for? Turn up the volume a little more!” Seriously, what the hell are you waiting for? Buy this album. Go. Now. Do it.

When Roxxi Catalano sings “You ain’t seen nothin’,” I sure hope he is right. I cannot wait to see what this band has in store for us next. This album is a brilliant ten out of ten. I cannot recommend any other album from this past year as much as this one. Every single reader of this website needs to do this band and do yourself a favor and check them out ASAP. Please go buy a copy of this album immediately. You will not be disappointed with anything.

This album finally received a physical release a few months after its initial digital release as a CD was made available directly through this band. How they are not signed to a label like Frontiers for worldwide distribution is a crime. My fingers are crossed that there are great things are on the horizon for Catalano and they get their just due. I am also holding out hope for a vinyl release too. Finally, this review would not be complete without a shout out to the tight rhythm section of Catalano. Drummer Nick Caligula and bassist Nick Casalini keep the beat pounding non-stop and hold things down rather nicely. Kudos fellas, kudos!