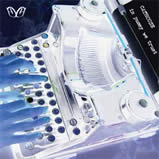 Production:
Produced by Cathouse. Recorded and mixed by Dario Ravelli.

Review:
It is pretty obvious that Italy’s Cathouse has two things on their mind – music and sex, and I’m sure they are using this mini album in an attempt to get the later. These long haired foreigners have done their homework and know exactly what made sleaze metal so great. Those elements are gritty vocals, searing solos and a “fuck you” attitude, all of which Cathouse seem to posses.

“Lesbian Night” kicks things off after the short funny intro of “Phone Call” and begins with wailing guitars. I have no idea what the singer is saying but it sounds like him and the band are having a hell of a time. “From My Heart” is an average song, but the riff throughout is incredible. The best song on In Pussy We Trust has to be “Teenager Desire”. It has a harmonica and slide guitar and sounds like something Cinderella would have pulled off in their later years.

One song on here is kind of sad, that being “Time To Be Superstar”. The lyrics go, “time to be superstar for me”, and even though these guys have the talent, the chances of a sleaze band becoming superstars these days are miniscule. It pisses a guy off knowing that bands like Cathouse exist in obscurity while completely inept bands rule the ‘rock’ charts. But maybe this type of music is supposed to remain underground?

Vocalist DD Cat has an appropriate name as he has a screech that some listeners might not be able to handle. He has the perfect voice for Cathouse, but sometimes he is too over the top (Axl Rose also has this effect on me). Overall I enjoyed In Pussy We Trust, a debut album that should satisfy fans of dirty hard rock. www.cathouseband.com.