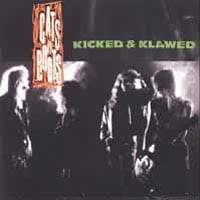 Review:
This was the first official release from this American/Japanese hybrid – they had previously released an independent EP in Japan). The sound here is very raw and gritty as displayed on songs such as “Nine Lives (Save Me)”, “Whip It Out”, “Evil Angel” and “Bad Boys Are Back”. “Shotgun Sally” was based on true story about a New Jersey woman acquitted of shooting her boyfriend on the grounds of severe PMS! There is also the haunting ballad “Every Sunrise” and the rocking “Tokyo Screamin” (which is only available on the Japanese import CD).

Cats In Boots was a classic example of loud and sleazy metal. Joel Ellis (who went on to form Heavy Bones) has a killer vocal range and Takashi “Jam” O’Hashi plays fast and furious guitar. Bassist Yasuhiro “Butch” Hatae and drummer Randy Meers also do a good job rounding out this rocking quartet. This band should’ve been huge! There is talk of them reforming and putting out a new album/touring. I hope so as I really like these guys and therefore I give this CD two thumbs up! Can you tell I love this band?