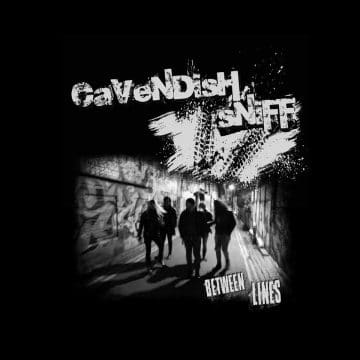 Review:
I can’t remember the last time that a live album was my first introduction to a band’s music. Yet, that is exactly what happened this time around with Cavendish Sniff as the UK group’s live album Between Lines is the first music that I have ever heard from them. Between Lines appears to be comprised of two sets of songs recorded on different occasions as the last three of seven songs on the album are labelled “Whiff Of The Sniff” and recorded, mixed and mastered by a different person. So the album is really two sets of live recordings on one album.

The sounds from the live recordings are definitely rough around the edges but good enough that I wondered what the songs would sound like with some decent production in a studio rather than in a live setting. Blending punk, ’80s hair metal and more recent sleaze rock, Cavendish Sniff provide a fun introduction to what they can do with Between Lines. I like the singer Dean‘s voice quite a bit and he sounds pretty damn good in a live setting. I know that the songs are pretty catchy as I was able to remember and sing the chorus portion to quite a few tracks in my head simply by looking at the s0ng titles. Most of the songs on Between Lines sound quite raw, upbeat and sleazy. There isn’t one weak track on Between Lines. They all rock. I do like the first four songs better than the last three. In particular, “Doing Time” and “Suicide Ride” are fun, fast paced sleazy numbers with some good timely background vocals to help the singer out. The guitar work isn’t fancy but does the trick. “All Or Nothing” is the best track out of the the three bonus ones or from “Whiff Of The Sniff.”

At first I was puzzled who was in the band. It seemed that this was a band that wants you to remember the group as a collective entity rather than any individuals from the band as the CD booklet made seemingly no reference to any of the band members, the group’s Facebook page did not identify any of the band members and even the website had no bio of any kind on its members. I finally realized that Cavendish Sniff have two Facebook pages (which explains my confusion) with one of them identifying the band members’ first names. Nevertheless, I find quite odd that the band’s CD booklet and website makes no reference to any band members. I have had to assume for the purpose of this review that the members listed on the group’s Facebook page are the ones that played on Between Lines.

Overall, Between Lines is a fun album to listen to although a bit raw in terms of sound quality. Nevertheless, the energy, upbeat tracks and live feel are strong enough for me to keep playing this album on a semi-regular rotation in the coming months. Given the crazy amount of music that makes its way to the Sleaze Roxx headquarters, that’s saying something right there.

Full band live recording from the Metway studios in Brighton.

Cavendish Sniff‘s “All For Nothing” (live recording) song:

Cavendish Sniff – All For Nothing

Live band recording at the Metway Studio in Brighton.Tell us what you think?Go check out our other videos on our YouTube channel and subscribe.You can also f…