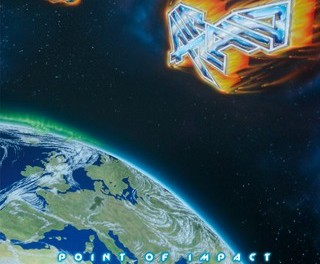 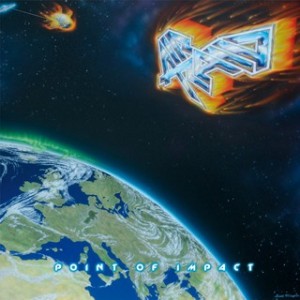 Review:
There seems to be a real renaissance of New Wave Of British Heavy Metal sounding bands in the last few years. Groups such as Lady Beast, Midnight Malice and Air Raid are bringing old-school metal to the masses… and that is a great thing!

From the Iron Maiden-like guitar harmonies on “Victim Of The Night”, to lead vocalist Arthur W Andersson‘s traditional metal (yet melodic) high-pitched delivery, to the Swedish band’s overall sound, Air Raid have delivered a record that will transport you to the early ’80s NWOBHM glory days. In particular, a track such as the instrumental “Flying Fortress”, with its amazing guitar melodies and solos, will take you back to Iron Maiden‘s classic Powerslave era in a heartbeat.

With established acts such as Slash and U.D.O. offering too many songs on their latest releases — which invariably leads to a few rather disappointing cuts — Air Raid have wisely only offered eight solid songs on Point Of Impact. What you get here is quality over quantity, which is definitely what every band should try to achieve. Point Of Impact has been receiving regular rotation ever since I acquired it a couple of months ago, and I really enjoy it every time because the songs have a lot of nuances to them that cannot truly be appreciated in a single listen. It is really hard to pick one favorite song over another, but if I have to I’ll go with “Madness”, “The Fire Within” (which brings me back to early Queensryche) and, surprisingly to me, the instrumental “Flying Fortress”. I don’t think that I have ever picked an instrumental as one of my favorite tracks on any record, but “Flying Fortress” gets the nod which tells you just how good these guys are as musicians.

The only thing I would change on Point Of Impact is the unnecessary, and luckily short, “talking” portion of “Vengeance” performed by the oddly named ‘The Rainbow Serpent’. Then again, none of the band members appear to take themselves too seriously with nicknames such as “Nightshredder”, “Stormchild”, “Thunderbolt” and “Destructor” — only new singer Andersson doesn’t appear to have a silly moniker (perhaps he still needs to earn his stripes before his bandmates allow him one). Whatever the case, the members of Air Raid can call themselves whatever they want — all I know is that I am loving their latest effort Point Of Impact and the retro NWOBHM sound they are bringing back in a strong and convincing manner.