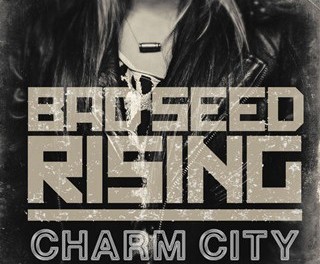 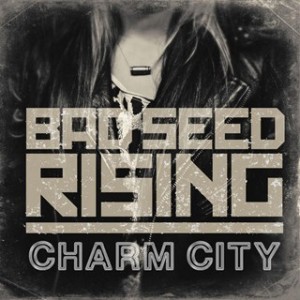 Review:
I first heard of Bad Seed Rising when they were scheduled to open the 2014 edition of the M3 Rock Festival in Columbia, Maryland. However, I ended up missing their set due to my late arrival (which also cost me Winger‘s performance) and I never did bother listening to any songs from the “local” Maryland based band. Fast forward to 2015 and Bad Seed Rising have once again found themselves on the M3 roster — but this time are slotted to be the day two openers. Considering that there are only a few bands (including L.A. Guns, Queensryche and of course Kix) returning from last year’s M3 line-up I thought I should give Bad Seed Rising a chance this time around in advance of their upcoming performance.

One song that I ended up listening to was the catchy “I Won’t Be The One”, which I later learned was from the band’s debut EP 606. Based on that track alone, I purchased both 606 and the group’s latest effort Charm City. Unfortunately, the songs on Charm City are simply not as strong as “I Won’t Be The One”. The EP kicks off with “Bad Seed Rising”, which reminds me a bit of Halestorm. However, the song’s chorus grates on my nerves — maybe it’s due to vocalist Francheska Pastor‘s singing or what seems like too many instruments and/or sounds going off during it — whatever the case, I am always relieved when it ends. Next up is “Hey Kid”, the first single and easily the best track on Charm City. Again I hear some similarities to what Halestorm would create, but what really makes “Hey Kid” so good compared to the rest of the EP is that Bad Seed Rising kept it simple and catchy without overplaying during it.

“Timebomb” is another pretty good track, but by this time I feel Bad Seed Rising is starting to sound more like a pop-rock band than an actually rock ‘n’ roll group — perhaps the production team is to blame in that regard. “King Kong” strays too heavily into the pop realm with its “la la la” portions and is easily the worst song… that is until I heard the closing “Wolves At The Door”. I will say that the guitar solo in “King Kong” is really good and sort of “saves” the song, but simply put, “Wolves At The Door” does absolutely nothing for me.

I do note that given all of the band members are still under the age of 18, Bad Seed Rising does have some upside potential despite what I consider to be a rather bland pop-rock oriented effort in Charm City. Although I am not crazy about this EP by any means, I’m actually still looking forward to seeing the band at the M3 Rock Festival in a couple weeks as I feel their music could translate well in a live setting. However, if the main and side stages overlap like they did last year at the beginning of the second day, I know which artist I’ll be skipping.