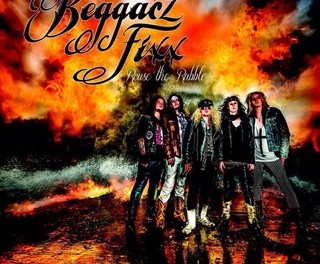 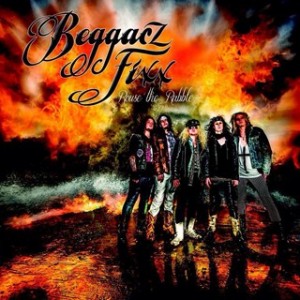 Review:
This is quite the surprise — less than six months after releasing their debut EP Rouse The Rabble, Beggarz Fixx decided to call it quits. According to the sleaze rockers’ Facebook page, the band’s final gig strangely took place during the EP launch on September 13th, 2014.

The first public inkling that things were not quite right appeared when Beggarz Fixx stated late last year, “…some of you may have noticed we’ve been pretty quiet lately, the reason being that we’ve been on what I guess you would call an official hiatus, ironically enough since our EP launch show! Just to let you all know, that will stand until into the new year. We hope to get together sometime in January and have a jam, see how things are going and whether or not we all wanna carry on with Beggarz Fixx.” True to their word, the British based band remained quiet until announcing in February of this year that they would be disbanding, saying, “We’ve made what we feel is some great music over the last couple years, had some epic adventures and met some awesome people, but when push came to shove it just wasn’t working out for us anymore for a number of reasons. But the important thing is there’s no bad blood between us and we’re all hopefully going on to bigger and better things, and we at least left behind a cracking EP for you…”.

I don’t mean to kick a band when they’re down, but Beggarz Fixx‘s debut EP really isn’t that good. If anything, there are so many different styles and ideas mixed together that what you’re left with on Rouse The Rabble are lots of good moments mixed with poor and perplexing decisions. A perfect example is the opening “…And The Devil You Know”, which starts with some slow drumming and a guitar riff that makes you feel like the song will build itself up to a climaxing crescendo — until singerChazza B. Bennett starts speaking (yes, speaking) through the rest of the track. Whatever momentum could have been built with the admittedly good music was systematically destroyed by the singer’s rant. To put it another way, the beginning of “…And The Devil You Know” had some of the promise of Iron Maiden‘s “Ides Of March” but quickly fizzled into a song that begs to be shut off in record time thanks to the vocal ramblings. The following “Outta Control” is no “Wrathchild” by any means, but is still pretty good — it sometimes feels like there is way too much going on though, and the old adage of “keep it simple stupid” could have turned “Outta Control” into a very strong song.

The EP’s best track, “Gimme Some”, kicks off with an infectious intro riff and never lets it up — the song is dripping with sleaze and attitude throughout, with somevocals reminiscent of Dangerous Toys‘ Jason McMaster. “Burn It Down” is all over the place and feels like a potpourri of ideas thrown together — it isn’t bad, but again could have benefited from some simplicity. “Sick ‘N’ Tired” is much of the same, although the short Iron Maiden-like guitar harmonies during part of the solo really don’t fit in with the rest of the song’s sleazy swagger. Rouse The Rabble closes with some acoustic guitar strumming that kicks into the power ballad “Walking” — a song unlike any of the other Beggarz Fixx compositions. “Walking” had the potential to be a lot better, but unfortunately missed the mark with Bennett‘s vocals really getting on my nerves towards the song’s end.

It is always sad to see a sleaze band call it quits, even if I don’t really dig their music. I think Beggarz Fixx had the potential to deliver a strong record down the road, by cleaning things up and keeping it their music a lot simpler — but now we will never know.

Reviewed by Olivier for Sleaze Roxx, May 2015