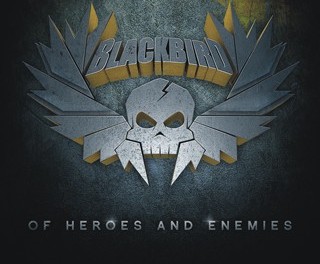 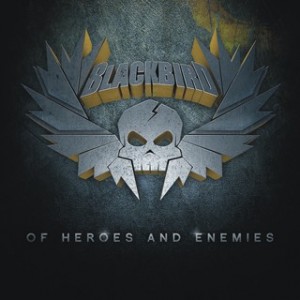 BLACKBIRD
OF HEROES AND ENEMIES

Review:
A few years ago it was suggested I check out a German artist by the name of Angus Dersim. Following a quick internet search, I promptly decided the frontman was right up my alley and went on the hunt for his album — which turned out to be a challenge, as the only place stocking it was Amazon Germany. Thankfully all Amazon websites function much the same, otherwise I could have unknowingly been clicking away ownership of my soul in an effort to purchase what turned out to be a killer debut.
For whatever reason, Dersim quickly ditched the solo career and formed Blackbird — although the direction of the two entities remains the same. What direction is that you may be wondering? The answer is simple, straight-forward hard rock that is heavily influenced by Australia’s most infamous export. While headlines of a new AC/DCalbum, not to mention the personal drama surrounding it, were dominating the rock ‘n’ roll hype machine, Blackbird had quietly unleashed a platter that eclipsed their idols in every possible way.
Frontman Angus Dersim doesn’t really sing throughout Of Heroes And Enemies, instead he growls with a gravelly delivery that makes your throat sore just by listening. His Udo Dirkschneider meets Dirty Looks‘ Henrik Ostergaard voice conjures up images of vocal chords being blown. The over-the-top Airbourne and Rhino Bucketinspired music is by no means original, but completely satisfies as it goes for the gut in convincing three and a half minute blasts of energy. Aside from “Deuce”, this album is full-throttle all the time — which is what we’ve come to expect from this ever growing genre of hard rock. I don’t have to go into much detail regarding the songs themselves but will say the opening “Fire Your Guns” is fist-pumping perfection, “Hero” ‘almost’ adds a touch of melody to the festivities, and “Ride With The Rockers” takes no prisoners. Arguably the track that outshines them all is “Of Heroes And Enemies”, which features an appearance from Sin/City belter Porty Portner for a rousing battle between what I refer to as ‘clone bands’.
While AC/DC are the ones placing on worldwide music charts, Blackbird are the ones delivering the three-chord rock that truly deserves those chart positions. Unfortunately few people have any idea Blackbird exist, but improvements are being made — I didn’t have to decipher German to purchase the disc this time around. I suggest you give Blackbird a shot — the only things that won’t thank you are your ears, because mine are still ringing.
www.blackbirdrocks.de – www.facebook.com/blackbirdrocks – www.purerock-records.com