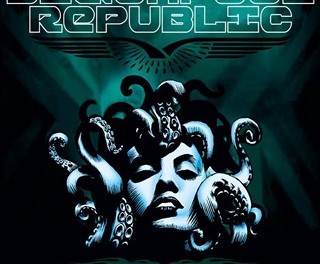 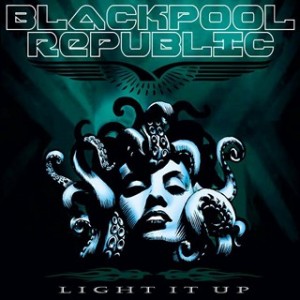 Review:
Great music is always appreciated, and Blackpool Republic have just served up a slice of rock ‘n’ roll heaven with the title track off their debut EP Light It Up. There is no denying that you can hear some major Rolling Stones influences during “Light It Up”, but who really cares? The song rocks and is likely the kind of track that Mick Jagger and company would have come up with back in their heyday. Everything from the Rolling Stones inspired guitar riffs and sound, to lead vocalist Chris Page‘s swagger-filled singing, to the awesome guitar soloing throughout the song makes it a winner from start to finish.

The one nice thing about Blackpool Republic is that although you might hear a lot of influences in their music, the Los Angeles group also have their own distinct sound and vibe throughout Light It Up. Out of the rest of the tracks on the EP I also really enjoy the groove oriented, but rocking, “Rock City” and the power ballad “Cry Me To Stone”. The latter reminds me at times of Guns N’ Roses, with some of the sounds that can be heard throughout, and I also hear some Poison within Page‘s vocals. The one song that I am not that crazy about is “Cut The One You Love”, which is not a bad tune by any means but feels like there is just too much going on. I would be remiss not to mention the great guitar work provided by former band member Ace Von Johnson (who is probably best known for his gig with Faster Pussycat) throughout the EP.

It strongly appears that the architect behind Blackpool Republic is rhythm guitarist Greg Gatti, who wrote all the music and handled most of the production for the EP. Clearly, Gatti is a talented individual because the EP sounds really good and the songs are well crafted. If you like classic and varied rock ‘n’ roll with a bit of a harder edge, you can’t go wrong picking up Blackpool Republic‘s Light It Up.