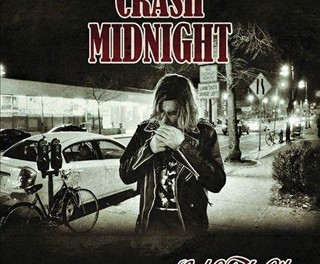 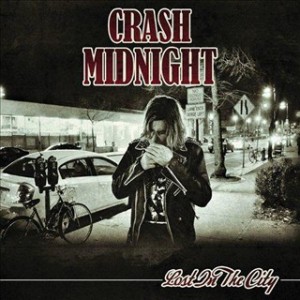 Review:
I didn’t know what to expect from this silver platter when it first arrived on my doorstep. After a fistful of days in heavy rotation to fully saturate the senses, in the aural titillation that is manipulating my psyche, I must concede that Crash Midnight‘s Lost In The City is a sleazy, gritty, street-punk and hard rock infused rock ‘n’ roll album to be reckoned with. “Just another band outta Boston” my ass… more like the ‘only’ band to come out of Boston in the last decade worth a listen if you ask me.

I thoroughly enjoyed every aspect of what Crash Midnight was throwing down — mainly tons of swagger, style, vim and vigor. A vocalist by the name of Shaun Soho that does carry a tune in a bucket, a bucket of rhythm and blues with a heaping helping of classic raspy lineage singers in the likes of Steve Tyler, a studio Axl Rose, Junkyard‘s David Roach and Buckcherry‘s Josh Todd… great company to keep. The rest of the band covers all the sleazy hard rockin’ bases with killer leads and foot-tapin’, head-banging hard rock that will appeal to the masses — both the metal heads and the ladies. For comparison purposes musically, Crash Midnight emulates (or maybe incant is more apropos) the mighty Junkyard (which I for one can’t hear enough of), a smattering of Guns N’ Roses, two fistfuls of Salty Dog, another dash or two of some classic rockers like Aerosmith and then lightly seasoned to taste with a number of artists in the ilk of Tora Tora, New American Shame, Spread Eagle, Cinderella, Buckcherry or any of those great party bands that you can’t spin enough and who just speak to you. You know the ones I mean, with the albums that never leave the tape deck… albums filled with tunes that make you drive a bit faster and maybe do a thing or two you shouldn’t, but be damned if at that moment you could give two rips.

The songs on Lost In The City are everything you’d expect and want from a gang of leather jacketed, street-walkin’, Marlboro-smokin’, whisky-snortin’ rock stars in the making. The leadoff single “151” is a killer drinking song and pays a huge homage to Junkyard‘s “Blooze” — no lie, play them back to back and it’s like part one and part two. Unintentional I’m sure, but brilliant none the less. From there we blaze through an album filled with ‘three minutes and done’ rock ‘n’ roll numbers with the highlights (in no particular order) being “You’re The Only One”, “Goin’ Down The Drain”, “Nowhere To Go” and the harmonica-laden countrified balladry of “Somewhere Yesterday”. That said however, you won’t go wrong with any of the other album tracks and you won’t skip a one… guaranteed.

I am quite looking forward to future installments from Crash Midnight and fingers are crossed that they trek out west for a show or two, as I am certain that a live venue would be the ultimate setting for these soon to be classic rock numbers. I bet the boys leave it all on the stage, as would be expected, and I want to be front and center for whole damn thing.