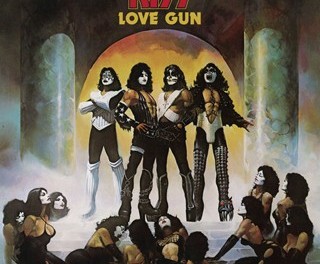 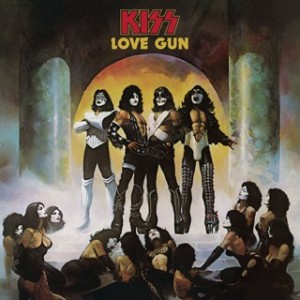 Review:
Thirty years ago, when I really discovered KISS and became a big fan, I was able to find their Love Gun album on vinyl at a used record store — back in those days, that seemed to be the only way to find and purchase the infamous band’s back catalogue. Fast forward to a few years ago; my brother gave me a copy of the remastered Love Gun on CD as a present — and it was a lot of fun revisiting that classic album.

To be honest, when KISS announced their intention to release a “deluxe edition” of Love Gun, my first inclination was not to purchase it. I fully intended on staying that course until I happened to have it in my hands while shopping at a large retail store. Perhaps I was just excited to have the deluxe version in my grasp, and forgot to take a close look at the track listing for the bonus disc. All I really saw were two song titles that I was not familiar with, “Much Too Soon” and “I Know Who You Are”, and before you knew it I had purchased the “deluxe edition” of Love Gun.

The newly remastered version of Love Gun is OK at best, because it does not really add anything to the legacy of the album — frankly, I prefer the sound of the original 1977 recordings, even if it does feel a bit dated. Considering that Love Gun was already remastered when it was re-released on CD, one wonders why it needed to be “remastered” once again? The answer is simply to resell it to the legion of loyal KISS followers, including myself (although I am inclined to return the CD, something I never do). It seems that my $20 could be much better spent on new music from hungry and upcoming bands than to have a third, slightly different, version of Love Gun complete with some disappointing bonus tracks.

This takes me to the bonus disc, consisting of demos, interviews and live tracks. There are a couple of “tracks” that should NEVER have made it onto this collection. First of all, the teaching demo of “Love Gun” is painful to listen to and amounts to someone strumming a guitar at a low volume — how on earth KISS thought it would be worthwhile to provide such a dull “track” is beyond me. Second of all, I hate when artists include interviews on an album, and to place one smack in the middle of the disc is even worse — if it was at the very end I could simply shut it off. Although the Gene Simmons interview is interesting to hear, including his thoughts of possibly taking off the make-up, it’s something I really only want to hear once.

The bonus demos don’t offer a whole lot either. “Much Too Soon” is a Simmons track that understandably did not make the original cut, and doesn’t even qualify as a rock and roll song if you ask me. Not surprisingly, the two other demos are also penned by Simmons, probably because he would write tons of songs but the band would only find one golden nugget in a basket full of rocks. “I Know Who You Are” is better and certainly more rocking than “Much Too Soon”, but again, understandably, did not find its way onto Love Gun. Considering that “Reputation” already surfaced on KISS‘ last greatest hits compilation, 40, there is nothing special about it being included on this “deluxe edition”. And in case that you did not get enough of (arguably) the best song on Love Gun, the title track, KISS offer you three different versions on the bonus disc alone — talk about overkill.

Overall, the bonus tracks contained on the deluxe version of Love Gun are very disappointing. I regret not following my first inclination and passing on this release — at least I can get my money back for this one.