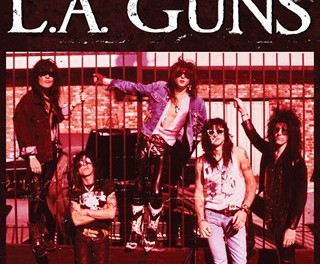 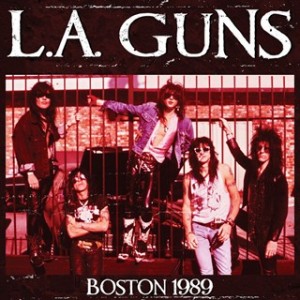 Review:
Controversy surrounds L.A. Guns‘ latest live album Boston 1989. While the record’s title and booklet indicate that this performance took place on November 4th, 1989, at the Orpheum Theatre in Boston, one has to wonder if the entire concert really occurred that year. All the signs seem to point that parts of the “show” were recorded at some point in 1991 or 1992.
Back on August 22nd, 1989, L.A. Guns released Cocked & Loaded, followed by Hollywood Vampires almost two years later on June 25th, 1991. So why would the band play four unreleased tracks at a Boston venue three and a half months after Cocked & Loaded dropped — songs that would eventually surface on Hollywood Vampires?L.A. Guns frontman Phil Lewis apparently wrote the Boston 1989 liner notes and indicates that, “Most of this set consists of material from Cocked & Loaded, only Bitch Is Back and One More Reason from the first record and a gaggle of new songs from the recently written Hollywood Vampires.” Well, that’s not true, simply based on the fact that four tracks from their influential self-titled debut are found here — “Electric Gypsy”, “Sex Action”, “Bitch Is Back” and “One More Reason” (five if you include “Nothing To Lose”, which is played half way into the over ten minute long “I Wanna Be Your Man” but not included on the track listing). Perhaps Lewis didn’t fully scrutinize the band’s storied past prior to providing the foreword for Boston 1989?
And really, would L.A. Guns have played not one… not two… not three… but four unreleased songs only a few months after having released Cocked & Loaded? Would they really have opened their set with three of those new songs? And would they have ended their performance with another previously unheard (at the time) composition? It’s all hard to believe if you ask me. In addition, when you listen to Boston 1989, “Kiss Your Love Goodbye” doesn’t feel like the opener based on Lewis‘ stage banter that includes reference to it being their brand new single. Frankly, it sounds like “Slap In The Face” and “Electric Gypsy” were the first two songs played on the night in question because of how the singer addressed the crowd after the latter. Interestingly, the first three tracks on Boston 1989 find themselves in the same order to what is found on the 1992 Japanese release Live! Vampires.
What makes the Boston 1989 controversy even more intriguing is that, according to www.setlist.fm, L.A. Guns performed at Salt Lake City a few days later and only played thirteen songs — none that would later find their way onto Hollywood Vampires. Because there are no production credits listed in the CD booklet, and with the obvious omission of “The Ballad Of Jayne”, it appears that someone (perhaps a record label representative) patched a bunch of songs together from various shows during different eras and decided to release it as Boston 1989. My guess is that portions of this album stem from the stated 1989 gig in Boston, while others originate from a show following the release of Hollywood Vampires.
Whatever the case, the reality is that L.A. Guns sound great throughout Boston 1989. It is also nice to have a live release from the sleaze rock veterans that offers something different than the usual fare found on their more recent live releases — such as an interesting cover of Montrose‘s “Rock Candy”.
The bottom line is I am happy with Boston 1989, and while you can call me cynical, I don’t believe that all of the songs found on this album were performed in Boston on November 4th, 1989. I guess the only people that really know the truth are the ones that attended the show on that fateful night.
www.laguns.net – www.facebook.com/officialLAGuns – cleorecs.com