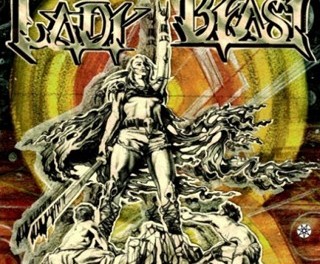 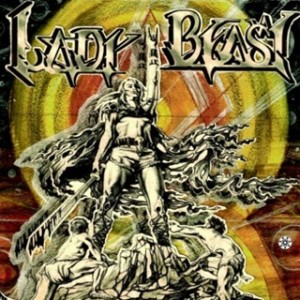 Review:
Old school baby — that is what Lady Beast is all about, plain and simple. From the opening chords of the Pittsburgh based band’s self-titled debut, you can hear the throwback metal feel and the New Wave Of British Heavy Metal influences — think early Iron Maiden and Judas Priest, and top it off with some Metallica circa Kill ‘Em All.

It doesn’t really matter what influences you can garner from listening to Lady Beast, one thing is for certain — this album rocks from start to finish. What distinguishes Lady Beast from other NWOBHM groups is that they have a female lead vocalist — Deborah Levine — and a damn good one at that. This record transports me to the beautiful yet raw metal sounds of the early ’80s. The production could be better, perhaps the songs were done in only a few takes, but the album is not over produced by any means. This is a record that has quite a few imperfections, yet overall comes across as a “perfect” raw metal album. For instance, lead axeman Tommy Kinnett‘s awesome guitar solos sometime feel like they are an awkward fit within the songs, particularly during “Lady Beast” and “Metal Rules”, but you know what… it works!

Having never heard of Lady Beast until they were announced as one of the five bands playing the pre-party just prior to the M3 Rock Festival (scheduled for May 1st and 2nd, 2015), I admit I did a little searching to find a hard copy of the band’s debut. It appears the album was first released in the U.S.A. in 2012, but the version I ended up purchasing was a 2013 reissue from France that contains one bonus track, a blistering cover of Judas Priest‘s “Ram It Down”.

Every track is a good one on Lady Beast, with my favorites being the opening title track, “Metal Rules” (whose guitar riffs borrow heavily from Kill ‘Em All), “When Desire Is Stronger Than Fear” and “Hot Pursuit”. With a little more polish, Lady Beast could be a true classic metal album.

The nice thing about discovering a band such as Lady Beast a couple of years after the fact is that they are already poised to release a follow-up, entitled Lady Beast II, in the near future — and I can’t wait to hear it! If you like old-school NWOBHM, you simply can’t go wrong with Lady Beast‘s self-titled debut offering.