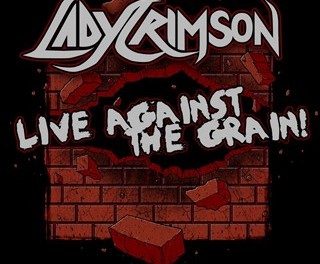 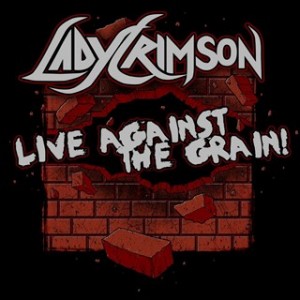 Review:
Are you ready for a head-banging trip down memory lane? To an ancient time when heavy metal was gaining momentum — waiting for the perfect time to boil up from the underground and take an unsuspecting public hostage with uncompromising guitar riffs, growling vocals and a heavy bottom end. This is the exact period of time Lady Crimson recreates on Live Against The Grain! — an era before major labels watered down the entire scene by signing anyone with shoulder length hair and image became as important as the music.

Lady Crimson are definitely rough around the edges, as this Australian band is obviously more concerned with creating music than fiddling with a computer to achieve crystal clear production. That is partly what makes Live Against The Grain! such an ’80s throwback, both in sound and feel — and may also explain the album’s moniker. Just like Ratt circa 1983, Lady Crimson power forward with killer riffs and a unique and unconventional frontman. While the album as a whole isn’t a Ratt rip-off, the similarities between the two are very pronounced during “Take Me Screaming” — especially thanks to the crunchy guitars.

The opening “Hell’s Number One” revolves around a simplified yet infectious riff and is nothing but a ‘full steam ahead’ hard rock track. The band uses the exact same formula for “Kick & Scream”, another song that thumps along in its ’80s metal glory. From there Lady Crimson simply put their foot on the gas and accelerate, however the album begins to give off an ‘I’ve heard this already’ vibe. The tracks are all top-notch, but there is so little variety between them that nothing really sticks out. Thankfully a couple moments during the second half do display Lady Crimson‘s true talents — the group discover a third gear on “Devil’s Daughter”, lighting up the fret-board with some furious riffing, and the slight shuffling groove of “Come Get Your Lovin'” (not to mention the breakneck solo) are both a welcome change of pace.

I have to say I enjoyed Live Against The Grain!, and despite their flaws Lady Crimson show ample amounts of potential throughout the album. Listening to this CD is like watching a child take their first steps, only in this case we have a determined hard rock group proudly finding their footing. While Australia garners worldwide recognition for the AC/DC sound, it is refreshing to hear musicians from Down Under take a different old-school approach.