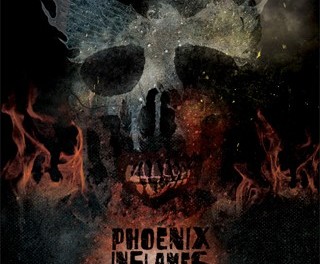 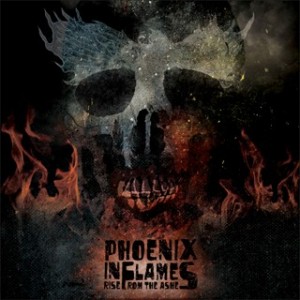 PHOENIX IN FLAMES
RISE FROM THE ASHES
Released March 23, 2013 (Phoenix In Flames)

Production:
Produced by Phoenix In Flames.
Recorded, mixed and mastered by Louis-Philippe Cyr.

Review:
After my review of Phoenix In Flames‘ Howling For Power EP, where I criticized vocalist Cornelius Black‘s singing to the point that I concluded the band should get a replacement, I had a pleasant exchange of Facebook messages with the frontman. Black advised that his singing had changed significantly from Phoenix In Flames‘ debut EP Rise From The Ashes to their second effort. To his credit, and despite my overall negative opinion of Howling For Power, Black invited me to review the band’s 2013 debut.

Had someone given me Rise From The Ashes to listen to without letting me know who the band was, I would have never been able to guess that it was the same group that would later release Howling For Power. First of all, Phoenix In Flames had a member playing keyboards (Mike DaniHell’s, who apparently left the band to study cooking), and secondly Black is actually singing on Rise From The Ashes — albeit with a French accent at times — compared to the “growls” that he often let out on the follow-up. Finally, Rise From The Ashes has better overall songwriting and a retro feel to it, akin to the great ’70s hard rock and metal records that had full-time keyboardists to complement the sound.

Unlike Howling For Power, I will put Rise From The Ashes in my regular rotation of music to enjoy. The tracks here feel like complete songs rather than a miss mash of ideas for which Phoenix In Flames was sometimes guilty of on their subsequent release. Don’t let the cover of Rise From The Ashes fool you into thinking the EP was produced by some sort of thrash metal band — the sound here is classic ’70s rock.

Rise From The Ashes starts off with “Hell Ride”, which just gets better and better as the song progresses. Although there are many different tempos during the song, everything flows nicely and is built on a cool guitar riff. “Born To Fly” is actually my least favorite track on the EP — it’s not bad, but the keyboards seem to have too much emphasis. The ballad “Broken Nation” is pretty good with its keyboard melody in the background and shows that Black can actually sing, before the song picks up and ends with classic Iron Maiden guitar soloing. “Drop The Gun” is also enjoyable, although a lot will depend will on whether you like the song’s vocal delivery. The gem on the EP is found with the closing “Sunday Hero” — this track quite frankly sounds like a great classic song from the ’70s. The keyboard solo in the middle is fantastic and the band does not overplay during the song — it is pure melodic rock bliss. This is what good songwriting is all about.