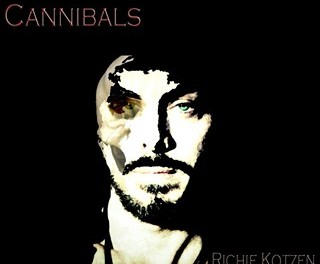 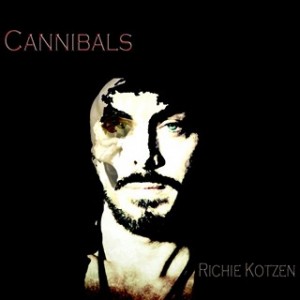 Review:
Another year brings another chunk of music from Richie Kotzen, the undervalued guitar virtuoso who finally got some wider exposure thanks to the largely successfulWinery Dogs project (together with former Dream Theater drummer Mike Portnoy and bassist Billy Sheehan, who needs no introduction).

The cool thing about Kotzen, apart from his crafty musicianship, is that he never delivers two similar sounding albums in a row. While his previous release 24 Hours had a strong funk influence, it was more or less a hard rock record — however his twentieth solo effort, Cannibals, is almost entirely funk rock. The rhythm guitars are very sparse on this album, with only a handful of Kotzen‘s delicious trademark finger-pick solos to be found — instead the bass lines and ’70s styled Hammond keyboards are dominant. The vocals however show Kotzen in his best form yet, as he hits the high notes with ease and delivers a feel that could give Robert Plant a run for his money (and that’s no overstatement).

In some ways, Cannibals reminds me of Kotzen‘s long forgotten Wilson Hawk project, which resulted in more of a ballad dominated album than anything he had previously released. The same situation occurs here, as some songs on this album, like “Come On Free” and “Time For The Payment”, would feel at home among Lionel Richie‘s catalogue. Among the standouts on Cannibals are the title track, which shows that Kotzen can handle bass with the same mastery he does a 6-string, “Stand Tall”, which brings back the fuzz sound of his heavily electronic 2001 effort Slow, and “Shake It off”, which starts with a bongo intro and then continues with a tasty funk-rock groove. My favorite track on the album however is the killer piano ballad “You”, which Kotzen wrote together with his daughter and where the guitar whizz uses no guitar at all, instead the solo is executed on a Theremin.

As stated before, Cannibals is a very different album compared to what Kotzen has previously recorded — the main difference being the strong move away from guitar and towards keyboards and bass. This is not really hard rock, or even a guitar rock record, but rather a funk and soul album. It seems to me that Kotzen wanted to push the envelope this time around so he isn’t seen only as a rock guitarist. However this versatility may not appeal to his core fan-base and some people might avoid this album simply because it’s not really rock music. Personally, I am a little disappointed with the lack of stronger guitar-driven material on Cannibals — then again, 2015 will see a new Winery Dogs release, so Kotzen may be holding on to the rock oriented songs for that upcoming album.

If you are not 100% focused on rock, and don’t mind an ample amount of funk n’ soul once in a while, feel free to treat yourself to Richie Kotzen‘s new album. You will definitely be surprised… and you might even enjoy it.