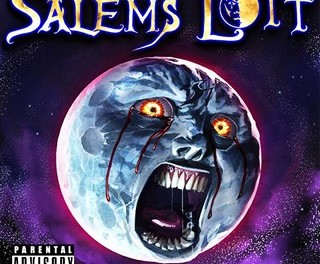 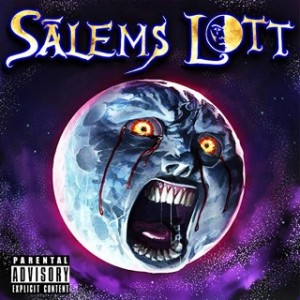 Review:
The ’80s Sunset Strip metal scene was dominated by outrageous caricatures. Walking male cosmetic counters put as much effort into their image as their music, although at the time one was as important as the other. Salems Lott are determined to bring the ‘show’ back to hard rock, and their S&M looks, crossing the line between W.A.S.P.and EZO, is as vital to their philosophy as it was to their ’80s peers.

One look at Salems Lott, with their skyscraper high hair, immediately makes you think glam, but this Hollywood group is undoubtedly heavy metal. On their self-titled debut EP Salems Lott show ample amounts of promise but at the same time are somewhat unfocused. The jack-hammering drum beats and shredding riffage of “Wings Of Duress” start things off on the right foot but it is the lead-off single “No Choice To Love” that really displays the shock-rock band’s abilities. For just over five minutes the song pounds out a heavy bottom end underneath crunching guitars and screaming/chanting vocals. “Smoke And Mirrors” is pure ’80s metal, with a vocal delivery that is a cross between Accept‘s Udo Dirkschneider and the BulletBoys Marq Torien (if you can possibly dream of such a combination).

On the other end of the spectrum is the short and forgettable instrumental “Atlas” and the mumbled “Black Magic” — with its insane tempo changes and out of place guitar shred solo the song sounds completely patched together, meaning “Frankenstein” would have been a more apt title. “S.S. (Sonic Shock)” works a bit better while venturing into speed metal territory, before the EP comes to a close with the mellow “Twilight Traverse” — an odd finish to an otherwise full-throttle collection of songs.

Many people will come up with early Motley Crue and W.A.S.P. comparisons when referencing Salems Lott‘s sound, but the obvious connection should involve another California group from the ’80s… Witch. Not exactly a household name, Witch‘s darker and heavier vibe, not to mention over-the-top stage antics, carved a niche while garnering a cult following. This is what I envision for Salems Lott — a polarizing group who will develop a rabid fan-base but will be perceived as too shocking to break into the mainstream.