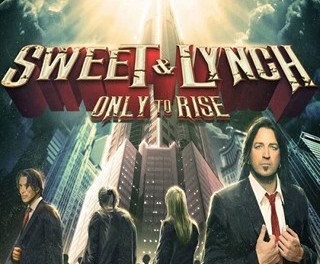 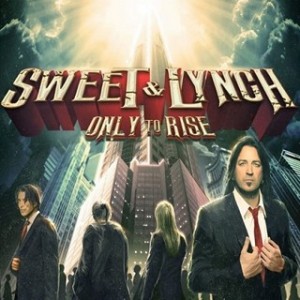 Review:
If you’re taking the time to read this review, then chances are you know the resumes of the musicians involved — so I won’t waste my breath talking about their accomplishments and skills. I will, however, sum everything up by saying Sweet & Lynch‘s debut album is what you should expect from four talented artists playing at their best.

Only To Rise is filled with great melodies and amazing guitar work from George Lynch — some of his riffs and leads take me back to Dokken‘s Tooth And Nail and Under Lock And Key albums, while a few of the guitar driven songs remind me of the first Lynch Mob album. And those of you that have followed Michael Sweet since Stryper‘s comeback already know that the frontman has been on a mission, and his voice is in the best shape of his career. Also, let’s not forget his writing and production abilities, both of which are nothing short of brilliant.

The album kicks off with “The Wish”, a perfect mid-tempo rock jam that is probably the most ‘Stryper‘ sounding song on the entire album. But there is no mistaking who is playing the solo, as Lynch brings back his mid ’80s flare on this track. “Dying Rose” is a straight-ahead Lynch Mob sounding tune with just enough bluesy swagger to tickle the ear, and when you add Sweet‘s trademark vocal harmonies during a punchy chorus you’ll be singing along after just one listen. “September” is a sobering reminder of the horrific events that took place on 9-11-2001, however it isn’t a slow sad song — the opening guitar riff has a bit of Iron Maiden‘s “Wasted Years” and then turns into a mid-tempo rocker that allows the rhythm section of James Lomenzo and Brian Tichy shine.

“Me Without You” is a ballad, but to my ears it is probably one of Sweet‘s best — and I have to admit it is quickly becoming my most favorite song on Only To Rise. Despite being a ballad, this song just sweeps you to a different place with its guitar phrasing (think Dokken‘s “Alone Again”) and an overall feel that really reminds me of old-school Lillian Axe. The vocal harmonizing in the chorus is just spine tingling, but watch out when the band take the song into overdrive and Lynch punches through with a wicked solo to tie everything together. “Me Without You” really is a perfect mix of Lynch‘s brilliant and clean guitar work and Sweet‘s beautiful vocals.

Only To Rise truly is an inspiring album — it’s safe to say that there is no hint of Aqua-net or spandex here, instead the CD contains a lot of the old flare while still being modern, and really fills in what rock ‘n’ roll of today is sorely missing. Every year it seems there are one or two albums that come out and just shake things up a bit, surprising us fans in the process, and this is one of those albums. Only To Rise has fist-pumping hard rockers, a couple slower gems, and a sobering recall of September 11th — this record has it all! But then again, with these four amazing talents who would expect anything but greatness?

If you are fan of any of these artists, or just a hard rock connoisseur in general, Only To Rise is a must have. I know it’s early in the year, but I will go out on a limb and say that this album will probably be noticed as one of the best of 2015. Sweet & Lynch, representing the top talent in the music business today, have made an album to compete with other ‘super-groups’ such as The Winery Dogs with their brand of straight-up hard rock — so jump on board, and let these twelve songs take you on a rock ‘n’ roll journey.