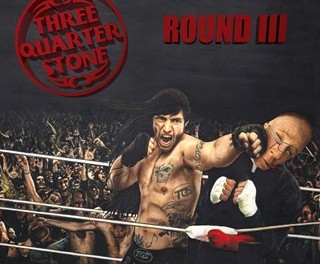 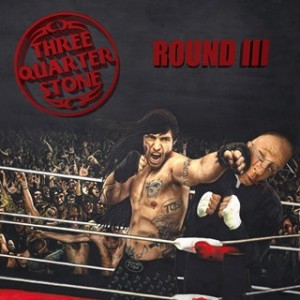 Review:
I hate when this happens… you listen to a band perform live, dig the songs being played, and end up buying their music. But when you eventually listen to the CD, it hardly sounds like the same band that caught your attention in concert. This is exactly what happened to me when Three Quarter Stone opened for John Corabi a couple months ago (read the concert review here). I thought I would be getting some solid heavy metal music from the Canadian rockers when I purchased all three of their albums after the show, instead I got mostly mid-tempo rock that doesn’t come close to approaching the heaviness they displayed when opening for Corabi.

To be fair, I have only listened to Three Quarter Stone‘s latest release Round III, and it could be that only one song from the record was played during the Corabi gig (although I suspect at least two songs — “Fighting” and “What If” — were played that night). Nevertheless, Round III is nowhere close to what I was expecting from the band. The album opens with “Fighting”, which isn’t as heavy sounding as it was live, but the genesis for the song remains — and unfortunately it turns out to be one of the best tracks on the record. From then on, the band takes you on a journey of mostly slower musical fare that does not come close to matching the energy and heaviness that the band exuded when I saw them in concert. The low point on Round III has to be Three Quarter Stone‘s cover of the Judas Priest classic “(You’ve Got) Another Thing Comin'”. While the original song gives me goose bumps every time I listen to it, Three Quarter Stone‘s version is simply awful and slowed down so much that you can barely recognize the song during the opening verses. Filling the classic track with piano and keyboards is an injustice that any listeners and Judas Priest fans should not be subjected to.

The best tracks on Round III are the opener “Fighting”; the moody and enjoyable “Searching”, with its plethora of background vocals; the heavy “What If”, which follows, blows away, and luckily makes you sort of forget the cover of “(You’ve Got) Another Thing Comin'”; “In The Next Life”, which is built on a solid guitar riff; and the surprisingly upbeat closer “Where It’s At” — but truth be told, I really only like those five songs on Round III. When you offer fourteen songs on an album, odds are there will be a few duds — and there are quite a few on Round III. By offering so many songs with differing styles it feels like Three Quarter Stone were throwing as much mud on the wall as possible in the hope that some of it would stick. This strategy appears to have been applied on the band’s two prior releases, since 2006’s It Starts Right Herecontains fourteen songs while 2009’s Bullet With A Name features thirteen.

In terms of trimming the fat, I think Three Quarter Stone would have been a lot better off limiting Round III to about eight tracks. Songs that could easily been cut are of course the Judas Priest cover, the slower Alice In Chains sounding “‘Til We Meet Again”, the ballad “Keep Your Distance”, and the boring instrumental “Interlude” (which is oddly placed as the twelfth track). The big question for me going forward is whether I will bother listening to the two prior Three Quarter Stone releases I bought after the John Corabi gig, because Round III doesn’t motivate me to do so.