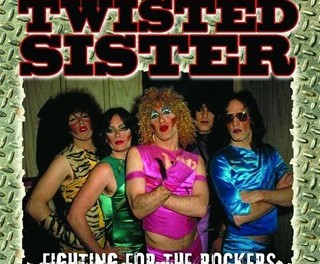 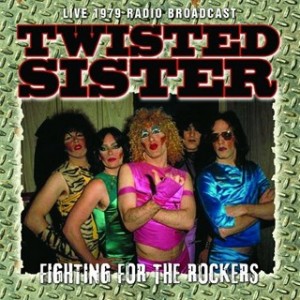 Review:
I’m one big Twisted Sister fan who will buy whatever the band puts out in terms of music. However, I must confess that I am getting slightly bored with some of their live releases, since they always tend to include the same old songs from the group’s glory days — namely songs from Under The Blade, You Can’t Stop Rock N’ Roll and Stay Hungry, with one or two from Come Out And Play. Granted, Club Daze Volume II: Live In The Bars predated the Under The Blade era, but I never felt that record represented a real gig given that seven tracks came from a radio show that was never broadcast during Halloween 1979 and four songs coming from who knows where. With its two studio additions, that record always felt like a patchwork of songs put together to have enough material for one release.

Fighting For The Rockers rectifies this, given that listeners are offered a radio broadcast of an entire show from 1979 — and what a show it was! The energy and attitude emanating from that performance is vintage Twisted Sister and really cements that the band already had its electrifying stage presence and shtick down well before they broke big and ended up selling millions of records. With only two tracks — “Under The Blade” and “I’ll Never Grow Up, Now” — from this release making their way onto studio albums from ’82 to ’87, listeners are treated to some early Twisted Sister cuts played at maximum fury. There are even two songs that have never made their way onto any prior Twisted Sister releases — “Workin’ On You Baby” and “Chinese Hustle” — the latter which might be considered inappropriate in this day and age, and reminds me of Steel Panther‘s “Asian Hooker” (in title only).

Fighting For The Rockers kicks off with “Rock ‘N’ Roll Saviors”, which could easily have found its way onto the debut record Under The Blade, and two of my favorite early Twisted Sister cuts are included in the form of “Pay The Price” and “Come Back”. What I have always liked about the ’70s era music Twisted Sister produced is that it sounds quite “raw”, unpolished and more blues oriented — albeit at a faster pace than what blues is usually played at. When listening to Fighting For The Rockers, I sort of understand why the group’s early repertoire of songs did not open a floodgate of record labels banging at their doors — the reality is that a song like “Under The Blade” is far superior to any of the others played that night. Frontman Dee Snider‘s songwriting definitely evolved into catchier and more powerful songs once the ’80s came along. That being said, I have always enjoyed the ’70s era tunes, from the Pink Panther like start of “Lady’s Boy” to the faster paced and heavier “Come Back”.

A band is lucky to have one band member that can properly get the audience going, Twisted Sister have always had two — Snider, whom I consider to be one of the greatest metal frontman ever, and guitarist Jay Jay French. Accordingly, it is not surprising that it is French who addresses the crowd first with a funny and pretty long story right before handling lead vocals on “Can’t Stand Still”. Having French sing on a couple of songs also shows that Twisted Sister was still in transition, in terms of Snider leading and taking over the reins of the band — after all, it was French who founded Twisted Sister.

Clearly, there has not been much, if any, editing of the radio broadcast because the rants from both Snider and French during “I’ll Never Grow Up, Now” pushes the song over the 17 minute mark. In addition, Snider makes some comments that I am not sure he would repeat in this day and age — “The only reason that we dress like queers is because we are out of our minds,” takes you back to a different era when homosexuals were routinely called “fags” and “queers”. At one point Snider rants about how rock and roll is not dead despite the emergence of disco — fast forward thirty five years and the question about whether rock is dead is still being debated. If anything, what time has proven is that rock never goes away, it simply goes through cycles in popularity.

Having heard Twisted Sister‘s classic studio albums way more times than I can remember, as well as the band’s various live records capturing those eras, Fighting For The Rockers is a welcome change and feels almost like a brand “new” record full of down and dirty in-your-face rock anthems from the legendary New York group.