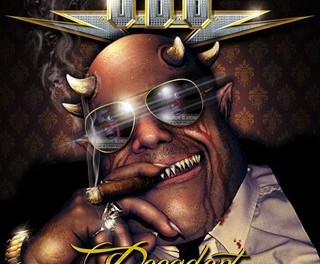 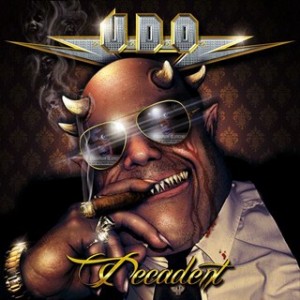 Review:
You’ve got to hand it to Udo Dirkschneider. Ever since first leaving Accept back in the late ’80s, the singer has been very consistent in releasing new record after new record — unfortunately and not surprisingly, this usually doesn’t translate into masterpiece after masterpiece. U.D.O.‘s latest record, Decadent, is a hit and miss affair at best, and limited to a large extent by Dirkschneider‘s lack of vocal range — the result is some tracks are really good while others, for a lack of a better word… suck!

Decadent starts off with “Speeder”, which has some cool guitar riffs and is a bit faster (as the song title can attest) than the usual U.D.O. fare. Unfortunately, I find that Dirkschneider‘s vocal range doesn’t fit well with the music on this track — nevertheless, it is one of the best on the album due to the musicality alone. The title track is also pretty good but suffers from a dull chorus where the song title is repeated over and over and over again (I quickly lost count on how many times it was mentioned) — yes, I know the song is called “Decadent”. “House Of Fake” is a solid rocker with more cool guitar riffing and some “new sounds” that provide a somewhat Arabic feel. I’m not sure what Dirkschneider was thinking when he included “Mystery”, because boring verses, a stupid annoying voice appearing from time to time, an uninspired chorus, and what feels like an experimental guitar solo easily render the song as the worst on Decadent and the worst I’ve ever heard from the U.D.O. discography (admittedly I don’t own everything, or even half, of what the band has released).

Just when I was ready to abandon Decadent, thanks in large part to “Mystery”, U.D.O. churned out “Pain” which finds Dirkschneider singing — yes singing! The song isn’t super-catchy by any means, but the verses and chorus sound really good given that the diminutive German sings rather than providing his usual growls. Next up is the ballad “Secrets In Paradise”, which provides some inspired guitar work but again stumbles along due to a limited vocal delivery, but it is followed by one of the album’s best tracks. “Meaning Of Life” should have been the lead-off single, and if I didn’t know any better I would have thought it was an Accept song from their ’80s glory days. “Breathless”, “Under Your Skin”, with its blistering guitar solos, and “Rebels Of The Night” are three strong tracks that help to end Decadent on a high note. However the closing “Words In Flame” feels like an attempt at an “epic” faster paced ballad (complete with what sounds like violins) that unfortunately misses the mark.

Decadent would have been a much better record if U.D.O. had focused on quality rather than quantity, and trimmed the fat by omitting weaker numbers like “Mystery” and “Words In Flame”. I’ll probably never listen to Decadent in its entirety again, and it certainly doesn’t compel me explore other U.D.O. records that I have missed out on throughout the years. However, I am happy to see that Udo Dirkschneider continues to carry the heavy metal banner and not rest on the laurels of his past — at least he attempts to continue releasing great new music.