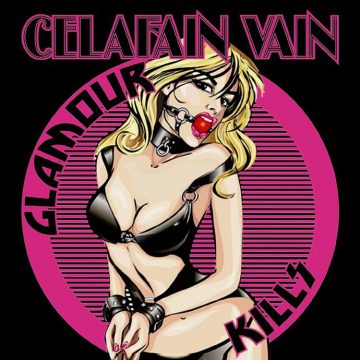 Review:
When I saw the bio for this release from the band Celafain Vain, it states “… for fans of L.A. Guns and Heart Throb Mob”,  I knew then I had to look into them. Just for that reason alone. Who nowadays even brings up/knows Heart Throb Mob? By the way, they are one of my all-time desert island faves. My hopes were dashed in a small part that this being a re-release and not an all-new up and coming band of glam saviors for this current day and age. Nonetheless, what it all comes down to is the music at hand. Is it good and has it stood the test of time? I must say wholeheartedly and with a resounding, “Yes”!

Before I go further, I would like to mention another band to the sound resemblance, another obscure (to some) but nonetheless amazing band — Star Star from New York with their great album The Love Drag Years because Celafain Vain are a bit more glammier but at times edgier version of them.

So with this release, Glamour Kills, all songs are catchy as hell and they got the glam pop vibe but not overly sugary. They do have that aforementioned edge to them and this is where the L.A. Guns sound comes in. So when opening track “Fits Like A Glove” kicks in, you know what you are getting into and this should definitely bring a smile to your lipstick smeared face. Shouted choruses, that glam groove, the song just drips with attitude. Other songs like “C’mon Get On” and “Rock Sex Thrills” are just textbook perfect raucous glam songs. They have that sexy edge to them. This is the music that made the boys put makeup on and the girls, to all run to them because of it. The song “Space Girls” is where the Star Star sound is the most prominent. Vocalist Kelli Koltt has those vocals down pat. The song “Jet Black” is a heavier tune that definitely has that LA Guns vibe from the verse to the bridge but the chorus kicks in and goes to more sing-along glam. The song In Your Groove is all glam attitude but near the end, it goes into a more heavy metal section with the heavier riff and guitar solo, which makes for an interesting change in style. The album has been cleaned up and revitalized to showcase the band for today’s ears. The production is clear, warmer sounding and there is a bit more bottom end present in the songs. You get the bass drum thump of drummer Nikki Vain and you can hear Cherri Bang’s bass groove.

I have to wonder how and why these guys did not make it bigger. Geography perhaps? This was pre-internet age, mind you and I am a bit ashamed to say even I was not aware of them. This here boys and girls is a sound so sorely missing these days and this should satiate those that are looking to fill that glam anthem void.

Reviewed by Will “Bones Lee for Sleaze Roxx, June 2018