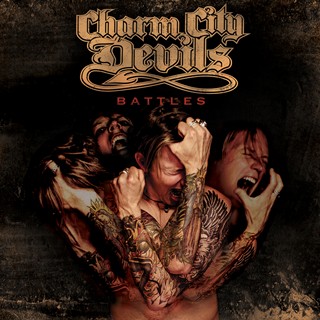 Review:
Baltimore, Maryland’s Charm City Devils have returned with their third effort entitled Battles. The band issued their debut album Let’s Rock-N-Roll back in 2009, locked up the opening slot on Motley Crue‘s high profile ‘Crue Fest 2’ tour, and created a buzz with the track “Let’s Rock-N-Roll (Endless Road)” — which received regular rotation on radio that summer. In 2012 Charm City Devils issued the follow-up Sins, however with the lack of promotion or national tour behind it the record went virtually unnoticed. Also, the decision to release the oft-covered “Man Of Constant Sorrow” as the lead-off single wasn’t the best of choices and didn’t go over particularly well.

Charm City Devils have regrouped and signed with The End Records to issue their third effort Battles. If you liked the band before you’ll find Battles to be the next logical progression for the group that has become known for playing melodic, contemporary, edgy, and radio-friendly rock. Some might say that the target audience is the ‘soccer mom’ demographic — and there is nothing wrong that because in this day and age they are the only ones still buying physical product.

Battles once again features a cover of a traditional folk song, in “God’s Gonna Cut You Down”, but this time it has been given a belligerent, bombastic, and adrenaline charged shot of rock ‘n’ roll that results in a refreshingly new take on the song. Singer John Allen has developed as a vocalist as evidence by the album highlights “Tear It Apart”, “Crucify”, “Rich N Famous” and the hard-hitting first single “Shots”.

While I wasn’t a huge fan of their sophomore album Sins, I feel that Charm City Devils have redeemed themselves with Battles — check it out.