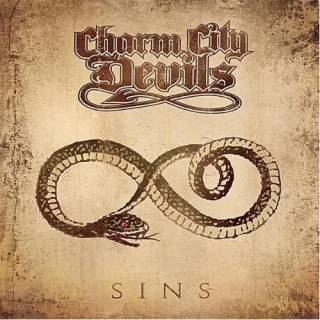 Review:
Strap yourself in and hold on to your girlfriends because the bad boys from Baltimore are back, however this time they turned the badass meter up to eleven! Charm City Devil‘s new album Sins can be summed up using their own lyrics; ‘unstoppable’ and ‘coming like a motherf*cking freight train’. Despite switching from Eleven Seven Music to Fat Lady Music, this was always going to be a highly anticipated release for me, due to the potential shown on their first album. Filled with plenty of raw aggression and passion, Sins is sure to delight every sleaze junkie and rock and roller.

The feeling of frustration, helplessness and sorrow are the driving forces behind Sins. You couldn’t be faulted for believing singer John Allen has just broken up with an ex-girlfriend as the notion of a ‘bitter break-up’ is more than evident. The motif of ‘anger’ is clearly and deliberately expressed in each and every track. The end result is a fiery blend of southern infused hard rock sure to have to you replaying from the start just as soon as the last song ends.

The opening track, “Spite”, is about pushing on in spite of people not believing in you, which leads into the second song “Unstoppable”. Both of these songs are energetic hard rockers — bleeding with aggression. “Man Of Constant Sorrow”, a cover of the traditional American folk song which was popularized in the film O Brother Where Art Thou, was released as a single prior to the album and was well received. The subsequent track, “Still Alive”, sets up the next couple of songs with a more blues-based style.

We then reach the first of two ballads, “Walk Away”, which is sure to wet your appetite for the stand out track of the album, “Devil Is A Woman”. To me it sounds like the band took “Rag Doll” and “Hangman Jury” from Aerosmith, tossed them in a blender with a pinch of modern day rock, and recorded it for this album — the song definitely has the most infectious chorus of the disc, and you won’t want to stop tapping your foot for days! “Start It Up”, “Love N War” and “Blame” are all high-octane, emotion-charged anthems which lead to the easing of intensity level during “Problem”. The second ballad is a more than satisfying end to the album, as “All You’ll Ever Need” sounds like a long lost B-side from Bon Jovi.

One of the most pleasing features of Sins is the amazing flow throughout the CD from beginning to end — similar to Sister‘s Hated. Each song seems to pick up on the energy and aggression of the one before, creating a vortex of unrelentingly pure rock and roll. John Allen uses the Tom Keifer-style vocals quite well, showing improvement from 2009, and the rest of Charm City Devils do a commendable job in performance — but the key is the song-writing, outstanding in melody, rhythm and lyrics. The production is near flawless in my eyes, using a balance of naked rawness which is clean but not over-polished, similar to that perfected by Crashdiet.

For anyone that ever wanted to know what it would sound like if you crossed Buckcherry with Cinderella, or Sister with Lynyrd Skynyrd, Sins is as close as you’re likely to get. If you’re anything like me you’ll cancel all your plans for the next few hours and put Sins on repeat. To sum it up in three words; aggressive, passionate and satisfying!

Reviewed by Alleycat for Sleaze Roxx, May 2012