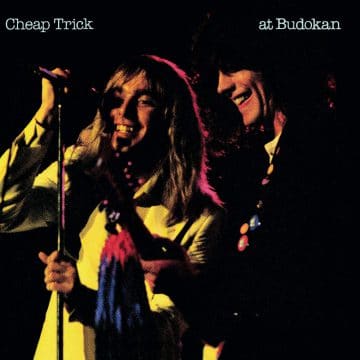 CHEAP TRICK
CHEAP TRICK AT BUDOKAN
Released in Japan on October 8, 1978 and in the US on February 1, 1979 (Epic Records)

Review:
The seventies were an amazing time to be a rock and roll fan. The records were incredible and the concerts, out of this world arena productions that featured everything from extra bodies on stage to props, pyro, and lots of loudness. Music was changing and along with it the technology to increase the quality, volume, and sheer force of the live concert experience even making it possible for great live acts to pack medium size venues despite not selling an equally large amount of records. This growing technology and the drastic growth of the live concert culture starting in the sixties resulted in rock audiences aiming their rock dollars at concerts over albums leaving record labels to wonder how to increase sales for artists drawing at the box office. The eventual answer came in the way of live albums, a recorded souvenir of a group’s live show and in the decade of arena rock it worked like a charm. Early on bands like the Allman Brothers and Deep Purple helped make the live concert trend popular through the respective releases of At Fillmore East and Made In Japan but it really took off when up and coming label artists such as KISS, Peter Frampton, and Bob Seger turned the audio experience of their live shows into record sales gold and platinum in each case lifting them from the list of countless struggling bands into megastars. While it’s hard now imaging these artists as barely known tour dogs, it’s even tougher to imagine tuning into classic rock radio and hearing Frampton‘s “Do You Feel Like I Do” or KISS‘ “Rock And Roll All Nite” any way other than live.

Just as Frampton Comes Alive and KISS‘ Alive! pushed both acts careers into the stratosphere, Cheap Trick At Budokan lifted Illinois band Cheap Trick into magazines and onto radio stations everywhere and eventually pop culture immortality. Even frontman Robin Zander‘s “I want you…to want…me!” rap before the song of the same name morphed into ice breaker material for teenage guys looking to score with chicks. From pick-up lines to nostalgic ticket selling lingo in ’80s cult classic flick Fast Times at Ridgemont High, over the years, Cheap Trick have become bigger than the average band.

Now compared to the eighties, I do have to claim being a huge fan of live albums in the seventies. By the following decade, live releases became more of a secondary novelty to home video concert releases but for a short while, they stood as equal additions to a band’s catalog and some of my faves included Ted Nugent‘s Double Live Gonzo, both KISS live albums and especially, Cheap Trick‘s Cheap Trick At Budokan.

Recorded spring of 1978 in Japan and released in America on the first of February the following year (following a Japan only release in October), Cheap Trick At Budokan is Cheap Trick at their live best even before the release of their upcoming best-selling album Dream Police. Much like KISS, a band they pay tribute to via the song “Surrender”, Cheap Trick‘s first live album followed a slow simmering trio of studio releases and seemingly overnight, turned the band into international stars, a stardom the band still faithfully adds to year in and year our through consistently strong live shows and studio releases. But how can anyone argue with the success of a band that basically served up a musical smoothie of early rock tinged with power pop and decorated with a couple of guys with teen idol looks all backed up with raw bar band energy? Heck, after Cheap Trick At Budokan, Cheap Trick pretty much became the most well-known bar band on the planet!

Kicking the festivities off amidst the sound of shrieking Japanese teen gals, Cheap Trick introduce the ways of the Western bar bands to the usually more staid Easterners with their cheeky welcome to the show opener “Hello There”, an introductory tune lifted from second album In Color. There’s nothing scientific or mind blowing about this. It’s just high energy rock and roll meant to lift asses out of seats and to this day when I drop the needle on this slab of wax, the mix of the audience, band, and energy grabs me. Rarely have there been simpler yet more effective lyrics that work so well in a live setting and leave it to Cheap Trick to take that whole “Hello Cleveland!” announcer idea and expand on it. Why no one ever did before remains a mystery but now and forever, the band owns that little cheap trick (pun intended).

As if the live energy at the jump isn’t enough, the swerve into power pop gem “Come On, Come On” gives me goosebumps now just as it did four decades earlier. It’s already clear by the start of the album’s second track that not only is Robin Zander a strong frontman but also not your typical rock vocalist. Falling somewhere between early crooners and odd punk rock muses like Jonathan Richman (Modern Lovers) and Lou Reed (Velvet Underground), Zander (and Cheap Trick) would bring American power pop into the mainstream and help kick off new wave in the process. Add in Cheap Trick‘s influence also on future singers like Mötley Crüe‘s Vince Neil and all of a sudden, this simple Illinois bar band had a hand in several future musical movements from new wave to hair metal! It’s this marriage of raw rock and pop melodies that make tunes like “Come On, Come On” and following track “Look Out” awkwardly hooky. Part of you wants to question it but the other part of you just wants to say “screw it” and dive right in. But just as soon as you get comfy, Cheap Trick switch gears from sticky sweet to their own version of sexy.

Most rock live albums benefit from a consistent blast of energy from start to finish allowing a double album to go a bit without wearing out any welcome but here again, Cheap Trick are not your average bar band. Opting not only to keep it a single 33 1/3 platter, the guys also change things up to close out the side first jumping into “Big Eyes”, a bass heavy tempo changing grinder of a track that makes use of Tom Petersson‘s 12 string bass talents before slowing the groove down even further with the chugging tempo of “Need Your Love”, a tune accentuated by blasts of oddly placed high points. The tune is loose and breathes just enough to allow Zander to float sweetly over the top. The build-up ending smokes and takes side one out with a bang courtesy of Rick Nielsen‘s lead guitar but essentially what makes this section stick is the back and forth between band and concert audition leaving the audience at home to imagine how it all must of went down.

If side one wasn’t enough, Cheap Trick start the second half off by digging deep into their bar band bag of tricks and pulling off a whopper of a take on Fats Domino‘s classic “Ain’t That A Shame” but this ain’t your folks’ version. Yeah, drummer Bun E. Carlos might of looked like dad or that weird uncle from the other side of the family but rock’s most geekiest, most underrated drummer takes his spot front and center pounding out the skins on Trick‘s now legendary rendition. Staying true to the original yet updating it sonically for a whole new generation, the guys pretty much pull off every smoky bar trick in the book including solo spots at the end for everyone, a hot guitar lead, breaks and more setting everyone up perfectly for that most legendary of all Cheap Trick moments.

If “Surrender” has become the cover choice of bar bands everywhere, then the live version of “I Want You To Want Me” is the song by the band that all other bands wish they would have written, not to mention wish they could properly pull off. How many local bar bands have butchered both tracks but man, on Cheap Trick At Budokan, Cheap Trick lay down the ultimate classic version of both back to back. Separately, they are stuff of pop culture legend. Together, they are pure magic on an album filled with magic… well… tricks.

By now, any rock fan would be fat and happy with a permanent plastered smile but then, as if to say “Umm, just a sec please”, Cheap Trick bring things back around with “Goodnight Now” before mustering up just enough energy to rock the already crazed audience into submission with “Clock Strikes Ten” complete with blistering guitar solo, pounding drums, plodding bass guitar, and of course pushy vocals. Again, it’s simple, high energy rock and roll laid out for all the party heads, dancers, drinkers, and anyone and everyone in between. Perhaps that’s the best part of Cheap Trick and this live album. It’s a fun time that pretty much anyone can dig.

When this one came out, you could feel the static and buzz coming off the record. Seriously, like maybe it was more than just a record but actually the live experience itself. The hairs stand on my arms just recalling the time I first brought my first copy home. The static cling of the plastic wrap, the feeling of seeing the centerfold, gushing over the booklet, and the crackling sound of needle on wax as the audience noise slowly faded in. I once thought “This can’t be real” and found out on my own just how real Cheap Trick live can be. That real that every fan of a band feels when they get touched by an artist live in concert. Difference is, somehow Cheap Trick still does it night after night, never letting the music down.

Guess there’s some benefits to being one of the world’s most well-known bar bands.