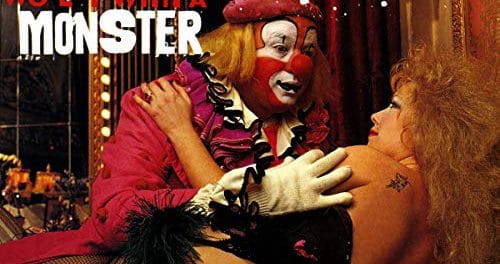 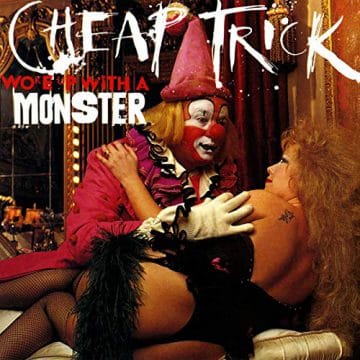 CHEAP TRICK
WOKE UP WITH A MONSTER
Released on March 4, 1994 (Warner Bros. Records)

Review:
Cheap Trick are one of the best live bands ever. I could go to a Cheap Trick show where the band creates an on the spot song, while singer Robin Zander sings an outdated phone book from A to Z, and I’d still be entertained. However some of their studio releases are sometimes filled with hit and miss songs, for me — three or four great songs and then fillers  (which is not taking away from the musicianship of the band, and there have been songs that didn’t touch me on record but blew me away live).

When I first got a copy of Woke Up With A Monster, it was when my local National Record Mart store was going out of business inside of my area’s mall, which was 20 minutes away. Not only was this store where I spent many hours during my visits buying several of my favorite cassettes, along with my first rock t-shirt, but it ended up being the last time a record store was at that mall in Boardman, Ohio to my knowledge. Woke Up With A Monster was a cassette I found at the price of around $1.00 after the 50% discount  price. I loved the cover of a clown with a blonde-haired woman. It was strange enough to capture my imagination, although I was not familiar with the band at this time (except for the 1980s hits like “The Flame”), but since the store was closing, I was buying as many cassettes as I could. After wearing out the cassette, I spent years trying to find a copy on CD, searching every used store I could find and, which is usually the case with me after searching for a rare CD for years, I saw it everywhere after I purchased my copy.

The Woke Up With A Monster album is my favorite Cheap Trick release, with almost every song a great listen. The band worked with producer Ted Templeman of Van Halen and Montrose fame to bring a harder sound. This is accomplished with “My Gang” — a rocking opener to the album — which includes intense drumming by Bun E. Carlos and the driving guitar work of Rick Nielsen. The title song of the album is next, and has an angry mid tempo groove with Zander showing his vocal range. This song fits well with the album cover, since some people are creeped out by clowns.  The days of album covers being part of the total product applies here, which tended to be a bygone thing by the 1990s. “You’re All I Wanna Do” is a radio friendly song, which has no guitar solo on it, and is around the four minute range. It would have been perfect for radio if the label would have promoted the album (the story goes that the ones who signed the band to the label were fired right before the album came out).

“Never Run Out Of Love” has a slower feel to it compared to the first several rockers on the album, which was co-written by Jim Peterik of the band Survivor (along with the previous song). Nielsen‘s guitar work has a heavy style to it in the background which gives it an edge to a normal ballad. Track five is possibly one of my favorite all-time songs by the band, especially the rarer ones. “I Didn’t Know I Had It” is a mid-tempo song about a guy who lost his girl, and this should have been on the radio if the label promoted it. This is a great song with wonderful lyrics, such as “I’d get more static than a broken radio.” Carlos‘ drumming during the bridge adds some fullness to the song. The first time I saw the band live, they played this song, which excited me even more, due to it being one of my all-time favorites. The lyrics have more depth to it than the typical guy loses girl theme.

The worst song on the release is next, entitled “Ride The Pony.” After having great rock songs , this one goes way out of the feel of the record with its overproduced dance/techno style to it. The guitar playing is fine, but I don’t want to hear Zander talking during the songs, but showcase why he is one of the best vocalists ever. Unfortunately, he doesn’t get to shine on this one, and if it wasn’t for the guitar work, the song would be an absolute skip for me. But, one bad song on the whole album is not a bad ratio. “Girlfriends” goes back to the staple of the solid rock music by the band, after the dance break of “Ride The Pony.” The lyrics are somewhat humorous, where Zander tells an unknown person he can play his guitars, steal his booze, but his girlfriends are all his (not one but all of them). This has somewhat of an AC/DC feel to the beat and rhythm.

“Let Her Go” is a song that I really enjoyed after not hearing it for years. Zander does not scream or has an angry tone on this one, like some of the others on the release. Carlos kicks off the song , and carries it throughout, and the guitar work compliments the driving feel of the beat. “Tell Me Everything” takes the record back to a slower feel, along the lines of the their last release,”Busted” in 1990. This song has the same format and style as “Can’t Stop Falling Into Love” (one of my all-time favorite songs by the band). This is another radio friendly song that never got a chance. “Cry Baby” shows that the band can cover the blues. This band has the musical talents for rock, ballads, heavy songs (on this record a dance song), and the blues. Rarely can a band cover all types of genres, but Cheap Trick can. Even though the lyrics during the song is not as strong as the others on the release, it’s still great stuff, and listening to it is enjoyable.

The release ends rocking again, with the song “Love Me For A Minute.” There is more percussion on the song, where most of the album has just the basic drum set to it. When listening to this song, I thought of a comparison to the Rolling Stones‘ “Sympathy For The Devil”, with the extra percussion work. This song would be great to add to your workout mix, or even blaring down the road in your car. This is a great way to end the album rocking out with energy, just like it started .

Woke Up With A Monster is one Cheap Trick album that should be in the catalog of Cheap Trick fans, along with listeners that want solid tracks all the way through (with the exception of one). Every song (but one) is fun to listen to, with something for everyone. There is hard rock, radio pop , blues, and ballad type of songs on here. This is one of my favorite releases that many may not know of, and shows how the band shines musically and lyrically. It’s too bad that the label didn’t promote it, and dropped them after one release, because there are several songs on here to enjoy.

Cheap Trick‘s “Woke Up With A Monster” video:

Woke Up With A Monster – Cheap Trick

Woke Up With A Monster – Cheap Trick