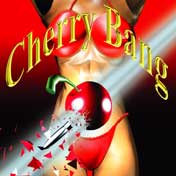 Review:
Popped! is the sophomore outing from these Ohio natives. Songs such as “Fantasy”, “Want Me” and “On My Own” show their talent. This band has a big local following, and I see why.

If Cherry Bang came out during the 80’s, they could have been big. They remind one of bands such as Pretty Boy Floyd and Vain. The songs are catchy and the band has a definable glam image, earning Popped! two thumbs up!