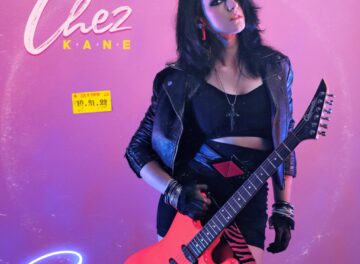 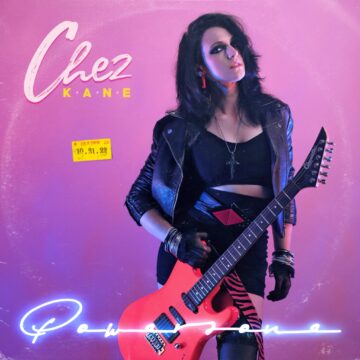 Review:
Chez Kane‘s cover art for her debut album caught my eye because… Well, because I’m a living, breathing, red-blooded heterosexual male. But, I really didn’t pay much attention to the videos that appeared on my YouTube nor the articles on Sleaze Roxx about her songs because I typically don’t get into girl fronted rock bands. Does that make me sexist? Misogynistic? I don’t know. I don’t think so, though. I think it just means that I typically can relate to the plite of an average dude more than that of a woman. And, while in my rock and roll fantasies, I might be wearing leather pants, I don’t think I’d ever fantasize about filling those pants quite the same way as Chez does. Simply put, I find it hard to find myself walking a mile in a female singer’s shoes than a man’s. And, remember, never judge a man until you’ve walked a mile in his shoes. Because, by then, you would be a mile away… And, you would have his shoes!

With all of that said, I eventually did give Chez a chance. In doing so, I was treated to a voice that can carry poppy hard rock tracks very well without the slightest hint of pretentiousness. In other words, I believe her. Combine her unique skills, amazing voice, and throwback style with the songwriting of Crazy Lixx‘s Danny Rexon and what you have is a female rocker I am not at all ashamed to say I really, really like. It still does take some explaining why a chick in leather is on the cover of the CD I leave on top of the bathroom boom box to my wife and kids. But, I’ll own it!

Chez Kane‘s first album delivered some great songs including “Rocket On The Radio”, “All of It” and “Too Late For Love” which had styles that ranged from Heart and Vixen, to David Lee Roth. I enjoyed it so much, Powerzone‘s release was on my radar immediately and I picked it up upon its release. The result? Well, I think “more of the same” about covers it… And, that is a good thing… More or less!

“I Just Want You” kicks off the album and has a very Heart like tone to it. Not very hard rocking but very catchy and it explores Chez Kane‘s vocal range. “(The Things We Do) When We’re Young And In Love” is next. This has some great guitar hooks and a little bit of a wordy chorus but has all of that good time vibe of a Crazy Lixx song. I think this might be one of my favorites on the album though, again, a little more pop than hard rock. “Rock You Up” is a very Crazy Lixx inspired song with a little bit of “The Power” off their most recent album Street Lethal. Combining that vibe with some of Crazy Lixx‘s classic support gang vocals much like classic Def Leppard and this is a fun song.

“Love Gone Wild” picks up the tempo and approaches hard rock a little closer. Maybe I’m crazy for saying this but I could hear a song like this being a suitable follow up to Vixen‘s Rev It Up. I really dig that there are saxophones in this track even though it is more rocking than some of the prior tracks. It almost feels like stuff that Crazy Lixx wouldn’t try but would work if they did. But, this isn’t Crazy Lixx. This is Chez Kane! “Children of Tomorrow” is next. Living the US, a lot of songs that could be good rock songs fall in the Country category because of the accent of the singer or minor inflections placed on the production. Sadly, if a country singer had sung this song exactly as it was with those small inflections, it probably would be a big hit to that audience. Great song. “Powerzone” is next up and we’re back to the hard rocking. I really like when she goes for the higher register and when she lets loose riffing on parts fo the song that aren’t exclusively lyrics. “Yeah” and “oh” and so forth if that makes any sense.

“I’m Ready (For Your Love)” is next and it simply hits a home run for someone like me who wants that ’80s inspired, uplifting hard rock style. Again, nothing about how she delivers these songs feels forced. “Nationwide” is another great song. Does anyone else remember the electronics store called Nationwide? You almost wish it was still around so this could be on their TV commercials! Very Vixen, I feel. “Streets of Gold” is a great song on the softer side. I have to be honest, I get a little bit of a Bon Jovi vibe from this one… Somewhere between classic Bon Jovi and modern uplifting country. I’m not a country guy. But, I can’t deny there is a little bit of that infused here. “Guilty of Love” is the final track and it is not a Whitesnake cover! Very large, full sound with a very ’80s vibe. Great song!

As you’ve noticed on this review, I’ve not said any song was bad. In fact, I believe I said every song was good. That isn’t a lie. But, the overall finished product gets a good review from me. I say “but” because I don’t think it is quite as powerful as the first Chez Kane album. Where the first album exceeds at poppy hard rock songs, this album leans a little closer into the pop with big sound for the incredibly catchy tracks. There is no mistaking Danny Rexon‘s songwriting style and that is a big reason why I like it. The other reason is just how real Chez Kane is. With her talents and looks, she could easily do a more mainstream style of music — sadly, probably country, and get more of an acceptance. But, I do believe she’s got a love of ’80s pop and hard rock in her soul. It is both refreshing and inspiring.

Don’t judge a book, or an album, by its cover… Even if that cover is a chick in leather!

Chez Kane‘s “(The Things We Do) When We’re Young In Love” video: