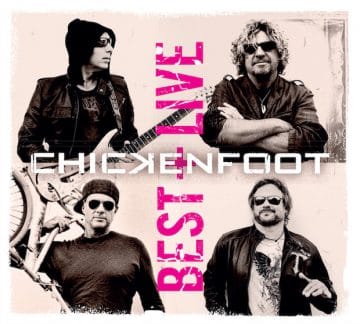 Review:
I know… Do we really need a greatest hits and live album package with one new song from a band that has only released two studio albums thus far? Normally, my answer would be “no” but in Chickenfoot‘s case, my answer this time is “yes.” Why you may ask? Well, for one, Chickenfoot are truly a “supergroup.” You have one of the all-time great guitarists in Joe Satriani playing in a band and not trying to steal the show! That in itself is quite impressive. Now add three guys that have sold a combined over 195 million albums worldwide (over 40 million for former Montrose and Van Halen singer Sammy Hagar, over 75 million for ex-Van Halen bassist Michael Anthony and over 80 million for Red Hot Chili Peppers drummer Chad Smith). If this is what it takes to get the “supergroup” Chickenfoot to warm themselves up for a third studio album or a possible tour, so be it. Given that Chickenfoot have been relatively quiet since the release of their last studio album in 2011, the aptly and “deceptively” named III, it’s nice to get something new from them even though when you really think about it, the only “new” material is the disappointing new track “Divine Termination” and the live version of their Deep Purple cover “Highway Star.”

The way I see it, my Chickenfoot CDs were collecting dust over the last few years and I have been regularly playing the band’s “new” Best + Live album ever since I got it about a month ago and in turn, rediscovering some of the supergroup’s great songs. If “Divine Termination” is indication of what Hagar, Satriani, Anthony and Smith have in store for us in terms of new material, perhaps it’s best to stop while they are ahead. “Divine Termination” is a slow plodder with some cool guitar licks from Satriani and some Beatlesesque sounds in the middle of the track. It’s certainly a listenable song but simply does not measure up to most of the “greatest hits” on the rest of the Best Of CD. In fact, just the opening guitar riff for “Soap On The Rope” shatters “Divine Termination” to smithereens. I am glad that “Soap On The Rope” is the second song on the Best Of CD because it reminds me what great chemistry that the four superstars had when they came up with Chickenfoot‘s self-titled debut album. “Soap On A Rope” is a great track filled with lots of groove and that “je ne sais quoi” that gives it that “it” factor.

Perhaps to be fair to both of their studio albums, Chickenfoot elected to choose five songs off each album to comprise the Best Of CD excluding the new song “Divine Termination” and the three live tracks. From the debut album, you simply can’t go wrong with the danceable “Sexy Little Thing”, the anthemic “Oh Yeah”, the hard driving “Get It Up” and the Van Hagarish “Future In The Past.” From III, the stand out track is no doubt “Big Foot” which I consider Chickenfoot‘s best song hands down. It’s the type of song that you can play full blast cruising with the top down in whatever vehicle you drive on a beautiful sunny day. I would love if Chickenfoot had one more “Big Foot” in them. I forgot just how good “Different Devil” was until I heard it again on this Best Of CD so if anything, this release might make you appreciate just how good Chickenfoot really are. “Lighten Up” is a solid rocker that deserved to be chosen among the five top songs from III. While “Dubai Blues” and “Something Going Wrong” are not the type of slower tracks that I usually gravitate to, they are done so well by Chickenfoot that they are solid additions to their greatest hits collection.

The Best Of CD ends with Chickenfoot‘s live renditions of Deep Purple‘s “Highway Star”, Montrose‘s “Bad Motor Scooter” (which happens to be the first song that Hagar ever wrote) and The Who‘s “My Generation.” While Chickenfoot‘s cover of “Highway Star” is a dynamite one, the band kind of loses the plot with their extended version of “Bad Motor Scooter” which lasts a ridiculous eleven plus minutes when the original was under four minutes. Chickenfoot‘s “My Generation” starts off well before turning into some presumably guitar whammy extravaganza by Satriani and Hagar singing part of the USA’s national anthem. This is where Chickenfoot start to lose me as I am not keen at all with their extended jams and improvisations when they are playing live.

I was actually at one of the six club promo shows that Chickenfoot played before the release of their debut self-titled album in June 2009. At the Mod Club Theatre in Toronto, Ontario, Canada, Chickenfoot electrified the room despite only playing their new songs and a few covers at the end. Perhaps it was simply seeing four superstars playing in a club with a capacity of only 600 people. While I do not remember being that put off by the extended jams when I saw them play live, it does get a bit tiresome hearing it on the Live CD. For instance, “Down The Drain” clocks in at almost ten minutes on the Live CD while it is only over six minutes on the debut studio album. “Turnin’ Left” clocks in exactly at ten minutes on the Live CD while barely over five minutes long on the debut studio album. “Future In The Past” is an extra three minutes long on the Live CD compared to the studio version. You get the idea. Just about every song on Chickenfoot‘s Live CD gets an extended jam or solo treatment that lengthens each track unnecessarily. Accordingly, while it’s fun to listen to the Live CD, I wouldn’t call it one seamless live listening experience by any means. I’ve always hated the long extended jams in concerts and there’s just too much of that on Chickenfoot‘s Live CD. It’s also worth noting that the live tracks have already been made available on Chickenfoot‘s Get Your Buzz On DVD.

Overall, I am glad that Chickenfoot released Best + Live because it has gotten me to rediscover the band’s great music. That being said, let’s face it, it’s more than a bit of a cash grab given the little new material — whether in studio or live — that you are getting from the band.

In addition to the brand new song “Divine Termination”, Chickenfoot’s new release BEST+LIVE (coming 3/10/17) features a best of selection and over 90 minutes…

Chickenfoot‘s “Soap On A Rope” video:

Chickenfoot’s second full-length music video for the song “Soap On A Rope” off their debut self-titled album. More info at http://www.chickenfoot.us/.