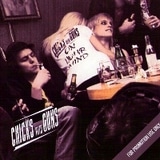 Review:
Contrary to the band’s name, Chicks With Guns aren’t actually chicks but four guys hailing from (again) the sleaze music capital of Sweden. I’m not sure what is in the water in Sweden that keeps brining so many sleaze rock bands to the fore, but whatever it is, I’m not complaining.

“Love At First Sight” starts things off with a bang and reminds me of a diluted version of Dirty Penny. The next three tracks don’t quite keep up the same momentum and are a little amateurish, but that doesn’t mean they suck – in fact they aren’t bad at all. What lets this EP down for me may have a bit to do with the not-so-great production. The backing vocals fall a bit flat and sound thin, like a hamburger missing the big slab of meat. That shallow sound is especially apparent on “Love Is A Game”, which is a good enough tune, but could be so much better with some gutsier sounding gang backing vocals.

Chicks With Guns have decent songs and music, but sound like they are restraining themselves from really letting it rip. They don’t quite come out all guns blazing and while not bringing anything brand new to the table, if you turn it up loud to get past the demo-like quality, there is plenty of potential here.