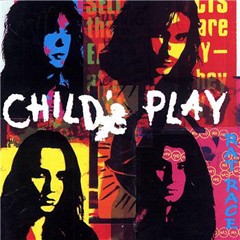 Review:
‘Wow’ — this one word can sum up Child’s Play‘s debut album Rat Race. How often do you encounter a record that you listen too by sheer coincidence and it happens to be killer? Rat Race was the first record by this Baltimore based sleaze rock band and I admit that I knew absolutely nothing about the CD or the band themselves.

I was not even aware that Child’s Play ever existed — not to mention recorded anything. What seems to distinguish Child’s Play from the rest of the early ’90s sleaze rock sound that was popular at the time is their technical prowess — especially the drummer John Allen (who later resurfaced in the more popular SR-71 and Charm City Devils), who reminded me of Vikki Foxx without the girly look. The other thing that makes this band stand out from the pack are their lyrics, which are really well written, ballsy, and handled perfectly by singer Brian Jack. Songs like “Rat Race”, “Evicted”, “When Hell Freezes Over” and “Capricorn/Bang Bang” (which starts with a killer drum solo) are really great rock tunes that could give Skid Row‘s first album a run for its money.

Child’s Play started out in 1983 and it’s really a shame that they didn’t get anything released until 1990, as we all know this was the beginning of the end for hard rock bands in the USA as grunge was rearing its ugly head. These guys struggled, and even released a sophomore effort on an indie label, but broke up when they saw that hitting it big would be impossible during the grunge years. It’s too bad, because albums like Rat Race not only make you feel like partying, pumping your fist in the air and racing down the highway, but also leave you with a sense of nostalgia of times when music was fun… and nothing less. ‘Fun’ is actually the other word that comes to my mind along with ‘wow’ when I try to describe Rat Race. We may be 20 years late but get this CD, you won’t regret it.