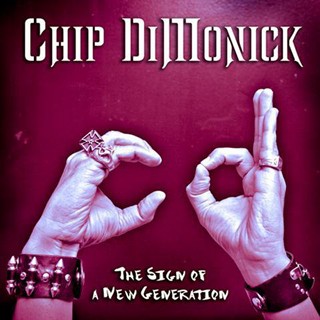 Track List:
01. Pump
02. Too Young For Tattoos
03. The Sign Of A New Generation
04. When The Drunkest Girls Wear The Shortest Skirts
05. She Won’t Let Me Play

Review:
When I first gazed upon the ridiculous artwork of The Sign Of A New Generation I immediately imagined this EP to be either abysmal or an exercise in tongue-in-cheek humor — and after a few listens I’m still not sure what to think. With an alias almost as silly as the artwork, Pittsburgh based Chip DiMonick fails miserably in capturing anything remotely linked to a ‘new generation’ but does stumble upon brilliance once in awhile.

My worst fears were realized during “Pump”, but after stomaching (barely) that rap-rock hybrid the band caught me off-guard with “Too Young For Tattoos”. This track showed that there was a hint of talent behind Chip DiMonick as the frontman sounds damn good screaming during the chorus of what is a fairly entertaining anthem. Then comes the title track, which sounds like a Pee Wee Herman sung pop-rock leftover from a Spiders & Snakes session — it’s best to forget this one too.

I was completely ready to give up on Chip DiMonick for a second time, but then he offered up the album’s pinnacle, “When The Drunkest Girls Wear The Shortest Skirts”. I love the song title and the track itself is an impressively heavy rocker that almost conjures up images of Motley Crue. Rounding out the EP is the catchy “She Won’t Let Me Play”, which appropriately ventures into mindless Poison inspired sing-a-long fun during the chorus.

So there you have it… five songs that have me as confused about the band as I was when I first saw the disc arrive on my desk. I have a feeling Chip DiMonick don’t take themselves too serious, and if their aspirations are to have fun while playing goofy rock they have succeeded. This isn’t the sign of a new generation, or an old generation, or any generation for that matter — instead Chip DiMonick is silly on all fronts and the type of band that are probably a hell of a lot more fun live than on disc.