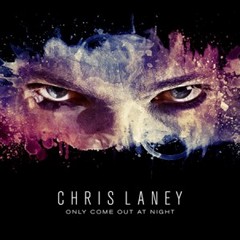 CHRIS LANEY
ONLY COME OUT AT NIGHT
Released May 7, 2010 (Metal Heaven)

Review:
Chris Laney has made a name for himself in the glam world by producing some awesome bands like Zan Clan and Crazy Lixx, to name but a few. Last year he also decided to jump in and join the rock ‘n’ roll party, presenting to fans his well received hard rock debut CD Pure. While the sound, songwriting and trademark background vocals have all stayed the same on his new release Only Come Out At Night, you can hear how much he has developed as a songwriter in just a year! This album is full of hard rock anthems, and a few mellower pop-rock songs, with hooks so big they could easily catch a great white shark.

The album starts off strong with the title track — a great hard rock song, though not the best on this release. It is followed by the hard-hitting KISS-like “Love So Bad” (co-written by Shotgun Messiah‘s Zinny Zan) and the, maybe, semi-autobiographical “Rockstar” (because in his words, ‘2B a rawkstar is eezee’) with its great “hey hey” chorus — it is one of the best songs on this CD. “One Kiss Tonight” is another great song, and even though I don’t think his voice fits the song perfectly (it is very ’80s pop, and I feel that a voice like that of Gloria Estefan, Bonnie Tyler or even Irene Cara would do this song justice) it is perhaps the best track on Only Come Out At Night. Hard-rocking “Gotta Run” comes next before it goes straight back into the “One Kiss Tonight” vein with “Playing With Fire”. Chris Laney‘s vocals feel more ‘right’ this time. Next up is the faster heavy metal tune titled “Crush”, followed by the very early ’80s glam metal of “I Had Enuff”, a song with great background vocals in its chorus. The CD ends with “Daydream”, Laney‘s collaboration with Conny Bloom of Hanoi Rocks and Electric Boys fame.

Only Come Out At Night has many highlights and if you are familiar with Chris Laney‘s work you will know what to expect from this CD. He is definitely inspired by the giants of the genre, and you can hear influences from the likes of Ratt, Motley Crue, KISS (Bruce Kulick even co-writes three tracks) and W.A.S.P. If you’re not familiar with his work then get this album if you like any of the ‘New Wave of Scandinavian Glam Metal’ bands like Crashdiet, Zan Clan, Crazy Lixx, Reckless Love and Wig Wam. Only Come Out At Night is a great release from a real pro.

Reviewed by Sleaze Glammer for Sleaze Roxx, May 2010