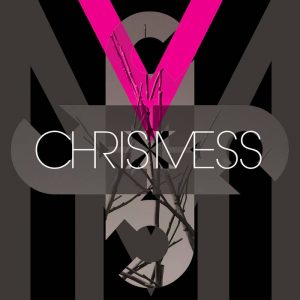 Review:
The Chris Mess EP is advertised as having a “sound rooted in and inspired by original era glam, rock ‘n roll, and power pop aesthetics.” Similarities are made to bands such as Cheap Trick, Queen, The Darkness, Ziggy era David Bowie and The Sweet while striving to move the needle forward and not back. I got to say that Chris Mess have really nailed it in terms of describing themselves.

I love the guitar tone on the album and Chris Niccoli‘s high pitch delivery is for the most part enjoyable except when he goes into falsetto territory. “Song For Zed” is seemingly the chosen money or showcase song for the band given that the track opens and closes the album and is also featured in a video. Funny enough, that is probably my least favorite song on the Chris Mess EP. Whenever I listen to the album, my thoughts have been that “Song For Zed” has some pretty good parts to it but Niccolo‘s high pitch borderline falsetto singing for a good portion holds it back from being a really great song. Luckily, the rest of the tracks do not seem to be plagued with the same falsetto singing. The cheeky “Bong For Your Mom” keeps all the great elements of “Song For Zed” while Niccoli refrains from going into the falsetto singing territory.

“Vitamin D” is a straightforward rocker with a bit of an over the top glam feel. Not my favorite by any means but not a dud either. “Don’t Make Me Hate” is based on a good riff but suffers from Niccoli‘s falsetto singing which creeps in here and there. Probably the best track on the album is buried in the middle. “Boom Boom Pow” sees Chris Mess deliver a strong song with some good riffs and some noticeable drumming without any venture into falsetto high pitch singing from Niccoli. This is what I would like to hear more of from Chris Mess. The one surprise song is a cover of David Bowie‘s 1972 classic “Suffragette City” which works well with the rest of the songs on the Chris Mess EP. The album closes with an acapella version of “Song From Zed.” I find that the cleaner version of that song actually works better than the EP opener that seems to have a little too much going on.

Overall, Chris Mess deliver an EP that pays tribute to some of the great glam bands from yesteryear while not sounding dated. While I am not keen on singer Chris Niccoli‘s falsetto singing at times, the EP is for the most part enjoyable to listen to.