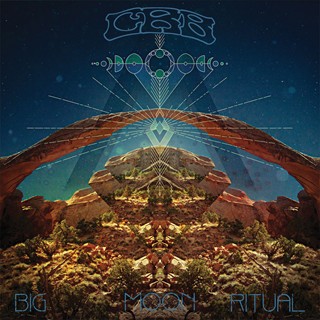 Review:
With The Black Crowes on an indefinite hiatus, frontman Chris Robinson and his ‘Brotherhood’ have spent the second half of this year ‘tripping’ around the United States in support of this psychedelic debut.

The blues/R’n’B strutting of Robinson‘s day job has given way to a lush landscape of sonic tapestry and cosmic poetic indulgence akin to a Fillmore vibe where the ghosts of The Grateful Dead and The Allman Brothers fight to be heard. But Big Moon Ritual is not just this — it’s the sound of a musician fleeing the nest, casting aside corporate chains and soaring to unchartered creative heights.

“Tulsa Yesterday” trickles into your consciousness on the back of a howling wind before Neal Casal‘s chiming strings and Adam MacDougall‘s ethereal keys languidly pull the band together just in time for a sleepy Robinson to assure us that he’ll be taking his ‘own sweet time’. Honed on the road, lengthy instrumental sections prevail yet never overstay their welcome and are reminiscent of the concept albums of years gone by. The arrangements give space for the music to breathe, creating an organic, improvisational feel that showcases the strength and depth of the talent on board.

Robinson‘s lyrics shine throughout as he enquires ‘Is the air getting thinner or are we getting high?’ (during the funky “Rosalee”) and on “Tomorrow Blues” we hear him declare that he’s ‘been on the road so long my shoes turned to sand.’ “Beware, Oh Take Care” is a powerful moment where we are treated to a striking combination of Robinson‘s wisdom, his voice dripping with soul, and Casal‘s sublime guitar building together to a devastating effect. Finally, “One Hundred Days Of Rain” addresses the conflict that exists when balancing the extraordinary with day to day life. Tinged with regret, Robinson tells his family, ‘Blow a kiss and wave goodbye to me, soon I’ll be outside your door.’

Big Moon Ritual is a formidable accomplishment — and its sister album, The Magic Door, from the same sessions, has only recently been released and is attracting favorable reviews. ‘Far out man…’